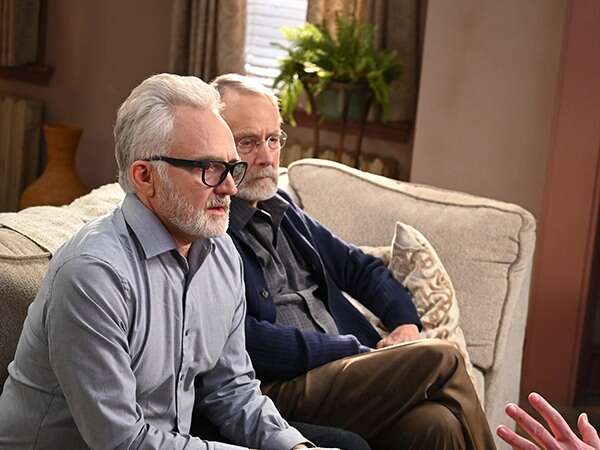 It’s time for triple the Peraltas on Brooklyn Nine-Nine.

This week’s episode reunites soon-to-be father Jake (Andy Samberg) with not just his dad (Bradley Whitford) but also his grandfather (Martin Mull), but it’s obviously not the happy reunion Jake might be dreaming of. In fact, it’s a mess.

However disappointed Jake was with his own dad, his grandfather might just be worse, but Jake may have found a way to get them to connect with each other, and you can see it in the exclusive clip above, as the two older men realize how much they loved playing catch together, especially when the neighbor kid fell off his bike and broke his arm so badly that the bone was sticking out. That memory reminds them of another time they watched someone fall and saw another bone, and it’s like they never fought at all.

“Ok, well, you guys are both monsters, but this is going great!” Jake says.

In “Admiral Peralta,” the Peraltas are reuniting for what’s supposed to be a fun family event, but which of course goes very awry. Meanwhile, Amy and Rosa work a high-profile case while Terry hopes to join the NYPD band.

Prepare for not only laughs, but one or two emotional moments between father and son and grandson this week. You may shed a tear or two, almost. We recommend a re-watch or three!

NZ: No new Covid19 cases announced for fifth consecutive day and no patients left in hospitals!