With everyone in the world going into self-isolation, it’s easy to feel like you’re cut off from society.

Good thing we have the internet and social media to keep in touch and in a time where we’re all in quarantine and countries are closing their borders, artists are looking to transcend them.

On Tuesday, Ali Sethi announced he’ll be going live on Instagram for a very special session for his fans.

Going live in 2 mts at 7.30 p.m with @alisethimusic and #FaridaKhanumji @VishalBhardwaj might join us too…

And sure enough, Sethi went live in a session where his mentor and veteran artist Farida Khanaum would have a talk with Indian singer Rekha Bhardwaj.

Director Vishal Bhardwaj also joined in and what resulted was a melodious night that proved you can be social while social distancing.

There were discussions on music and life. Rekha performed a few lines written by Vishal while Sethi also belted out a few tunes for the audience and the Bahardwajs just loved it!

Ali Sethi was one of the first Pakistani celebs who decided to give live Instagram concerts to his fans.

And from the looks of it, the latest session wasn’t just for his fans but a gift for himself as well! 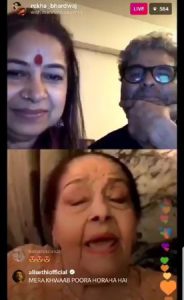 Apart from Ali Sethi, Salt Arts also decided to host a live session yesterday which blurred borders; they got musician Ankur Tewari onboard who also performed his works for the followers.

⏰ BTS – Watch till the end ♥️ lockdown Mumbai to lockdown Karachi, and to all of you in between, some late night mohabbat, from the #mohabbatzindabad man himself. This was Soundcheck, here’s Dil Beparvah. Join @ankurtewari + @raaniadurrani on IG Live at 9.30PM Pakistan Time 🎧 #ankurtewari #saltarts #soundcheck #dilbeparvah #southasia #lockdown #india #pakistan #mumbai #karachi #cityfm89 #redbullpk #takeiteasy

It’s strange that it took a pandemic to unite us this way but hey, that’s a nice silver lining in all this tragedy.