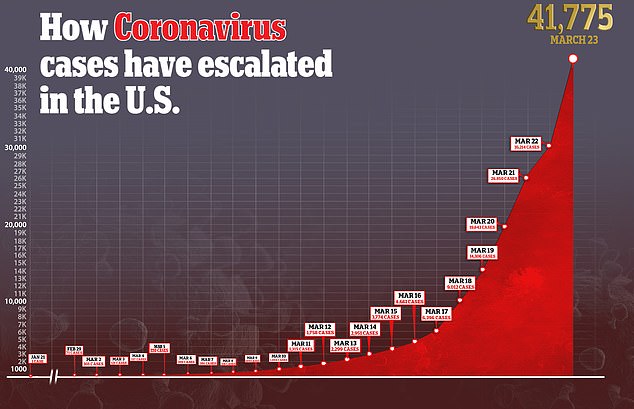 Fuelled in large part by the virus’s rapid spread in New York, the US is now the third-most infected country in the world, with nearly 42,000 cases. Only China and Italy have seen more cases of COVID-19 than the US, with 81,093 and 59,138 cases in each.

New York now has nearly six percent of worldwide coronavirus cases, according to Governor Andrew Cuomo’s Monday announcement.  The state’s 157 deaths account for one percent of the global fatalities from the virus.

With 20,875 New Yorkers diagnosed with the virus sweeping the globe, the state has far surpassed all other states and hotspots in the US for coronavirus cases and New York City alone has 12,305 cases, accounting for 3.5 percent people with coronavirus worldwide. 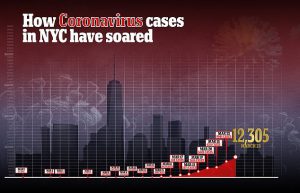 Cases in the New York and country have surged as a result of both the virus’s rapid spread in and outside of high-density areas like New York City and as testing capacity has ramped up steeply in the state.

The state is bracing for its hospitals to become overwhelmed, with Governor Cuomo pushing to double bed capacity, telling the workforce to stay home and beginning trials of experimental drugs for coronavirus on Tuesday.

Other hotspots include Nassau County with 1,900 cases and Westchester, where a lawyer lives there and who worked in Manhattan became a ‘super-spreader.’ Now, nearly 2,000 in the county are infected. 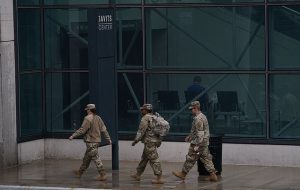 In an effort to stem the virus’s spread, Cuomo ordered all non-essential businesses to close, effective 8pm Sunday. He also hit out at New Yorkers for ignoring the government’s warnings to stay home and keep their distance from one another.

He noted that with all hospitals increasing capacity accordingly, New York would have 75,000 but even that increase that won’t solve a potentially catastrophic issue: a critical shortage of ventilators. New York only has some 6,000 ventilators.

Cuomo announced that New York has gained Food and Drug Administration (FDA) approval to begin prescribing a combination of hydroxychloroquine and Zithromax (an antibiotic) under compassionate use. 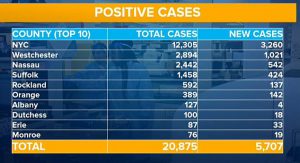 The state is also set to start giving patients battling coronavirus blood plasma from people who have recovered from the infection, a technique that was used in China to transfer antibodies developed by recovered people in response to COVID-19 to those still sick.

After successfully deploying its oral and nasal swab test, New York is now developing a serologic blood test, which would indicate if someone had been unwittingly infected with coronavirus and recovered. If this was the case, these people would have built up immunity and might be able to return to work.

Still disappointed in the prevalence of New Yorkers – especially young people in New York City – out and socializing in groups, Cuomo insinuated that he would consider legislative action to enforce social distancing.

Man sets himself on fire outside PM House