Queen Elizabeth in a statement issued by Buckingham Palace last night said she is “particularly proud” of her granddaughter-in-law Meghan Markle as the Royal couple embarks on an independent future.

“Harry, Meghan and Archie will always be much loved members of my family,” she said, referring to the couple’s baby son.

She thanked the couple for the dedicated work they had done, saying she was pleased they had found a constructive way to move forward.

She expressed her desire for the family to create a “happy and peaceful life” which the couple intend to purse in North America where they can set their own agenda and make money how they choose. 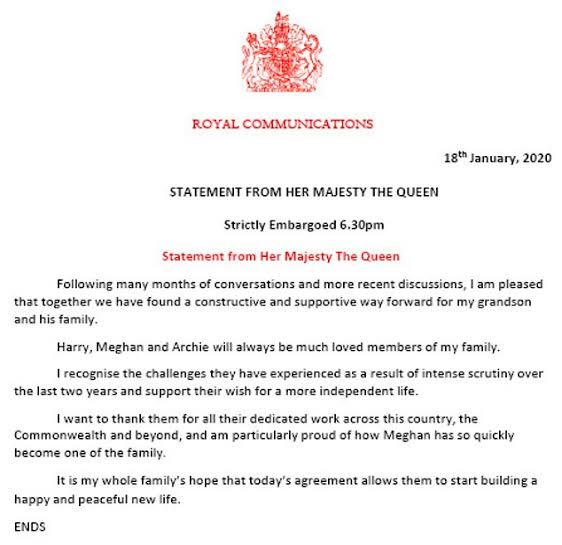 Despite being surprised by Harry and Meghan’s announcement on January 8 that they wished to step back as senior royals, the Queen revealed that she had been aware of the couple’s unhappiness and desire to pursue a less prominent role.

“Following many months of conversations and more recent discussions, I am pleased that together we have found a constructive and supportive way forward for my grandson and his family,” the Queen said in her statement.

“I recognise the challenges they have experienced as a result of intense scrutiny over the last two years and support their wish for a more independent life.” 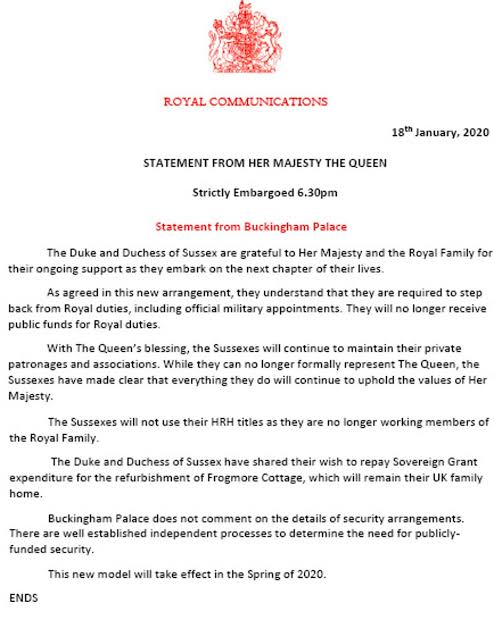 “I want to thank them all for their dedicated work across this country, the Commonwealth and beyond, and am particularly proud of how Meghan has so quickly become one of the family.

“It is my whole family’s hope that today’s agreement allows them to start building a happy and peaceful new life.”

The Queen’s words of praise over how Meghan has adapted so swiftly into the Royal Family comes after months of controversy surrounding the Duke and Duchess of Sussex.

The statement issued by Buckingham Palace last night revealed that Prince Harry and Meghan will no longer use the titles ‘royal highness’ or receive public funds for their work under a deal that lets the couple step aside as working royals.

Releasing details of the dramatic split triggered by the couple’s unhappiness with life under media scrutiny, the palace said Harry and Meghan will cease to be working members of the royal family when the new arrangements take effect in the “spring of 2020.”

Harry and Meghan will no longer use the titles His Royal Highness and Her Royal Highness but will retain them, leaving the possibility that the couple might change their minds and return sometime in the future.

Harry’s late mother, Diana, was stripped of the Her Royal Highness title when she and Prince Charles divorced.

Read More: Britain’s Harry and Meghan will no longer be working members of royal family

They will be known as Harry, Duke of Sussex, and Meghan, Duchess of Sussex. Harry will remain a prince and sixth in line to the British throne.

The agreement also calls for Meghan and Harry to repay £2.4million in taxpayers’ money spent renovating Frogmore Cottage near Windsor Castle. However they will continue to use Frogmore Cottage as their base in England.

The deal came after days of talks among royals sparked by Meghan and Harry’s announcement last week that they wanted to step down as senior royals and balance their time between the UK and North America.

ALI REHMAN’S ‘SUCH’ HAS BEEN REVEALED!