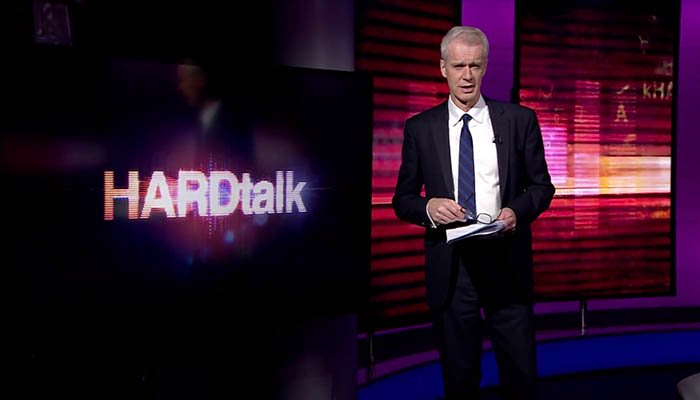 A video clip of an Indian journalist, Deepak Chaurasia, has been doing the rounds on the internet in which he can be seen confronting a panelist rather angrily.

Instead of allowing his guest to speak, Chaurasia walks over to the guest and starts engaging in a shouting match with him.

“Tell your communist buddies to let the Jawarlal Nehru University (JNU) student unions speak,” he shouts at the guest.

He goes on to accuse the guest, who claims to be a student of the JNU, of being a traitor to India and being loyal to Pakistan.

Sackur tweeted the clip with a sarcastic comment, stating that the video made him realise I’ve been doing BBC HARDtalk all wrong.”

Sackur’s tweet induced others to take to Twitter as well, slamming the Indian journalist for taking a position where he was meant to act neutrally.

Pakistan has in the past accused the Indian media of beating the drums of war at the height of tensions between the two nuclear-armed nations last year.

Various Indian journalists and news anchors have been slammed by their peers for promoting war with Pakistan for TV ratings.

Hareem Farooq shares tips behind her glowing skin: check out