Amid the coronavirus, inhabitants of Lahore seem to only partially adhere to the guidance given by the government in terms of safety measures.

The 15-day lockdown began at 9am on Tuesday after the government announced closure of all public and private establishments, shopping malls, restaurants and recreational spots.

Dolphin and Police Response Unit marched on the main roads to reassure the public. Except rail and air traffic, inter and intra-city public transport also shut down. Metro bus operations had already shut down a day ago on Monday. 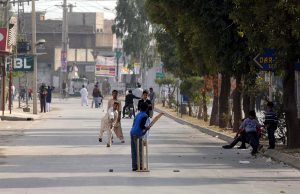 However, auto and motorcycle rickshaws continued to ply on city roads, completely ignoring the social distancing protocol wherein each person has to maintain at least 3 feet away from the other.

The motorcycle-rickshaws were seen laden with six to eight passengers with no protective gear and, in most cases, overcharging the people. Pillion-riding ban was also openly violated as three youngsters were spotted riding one motorcycle on The Mall.

On the most part the traffic police acted against public transport owners and fined 80 rickshaws, two buses and three wagons in the Lari Adda sector. Applications for cases against the violators were also submitted at relevant police stations.

Police had set up pickets on some roads and were warning commuters against violation of the lockdown — even the night before the decision was to be implemented, giving the hope that the policy would deter the public. 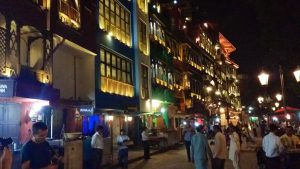 On Tuesday afternoon, the restrictions seemed to have loosened, as families were seen travelling in their cars and youngsters riding as pillions. As per the government orders, more than two people cannot travel in a car and a third person is allowed only when shifting a patient to a health facility.

Many people were seen playing cricket on many roads, particularly in downtown neighbourhoods. Some groups of people were also found playing cards along the Canal Road.

Chief Minister Usman Buzdar played down the violations of lockdown, saying it was not a curfew, when a reporter drew his attention towards the fact during a press conference here.

Markets, however, wore a deserted look throughout the first day of the lockdown and except bakeries, fruit and vegetable shops, pharmacies, kiryana stores and dairy product shops, all other businesses remained closed. Except pharmaceutical and food industries, all other industrial units remained closed across Lahore.

All banks remained open though they had called in some necessary staff members. Their operations were rescheduled between 10am and 4:30pm and the administration was warned that in case of detection of a coronavirus patient, the branch would be closed down. Security guards were directed not to allow more than four customers inside the premises at a time.

The government had allowed free meal services such as Edhi, Saylani and Muft Dastarkhwan to continue functioning, while public dealing at call centres was scaled down. Petrol stations were permitted to function as usual.

The Possibility of a Complete Lockdown Nationwide!