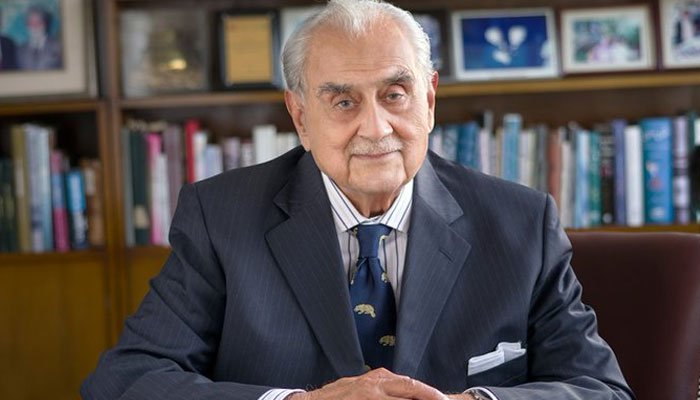 Renowned Pakistani businessman, philanthropist and educationist Syed Babar Ali has been elected as a member of the American Academy of Art and Sciences in recognition of his efforts for creating Lahore University of Management Sciences (LUMS). After Dr Abdus Salam, Syed Babar Ali becomes the second Pakistani to earn this honour.

The American Academy of Arts and Sciences is one of the oldest learned societies in the United States. Founded in 1780, the Academy is dedicated to honoring excellence and leadership, working across disciplines and divides, and advancing the common good.

Syed Babar Ali received his education from Aitchison College in Lahore. For further studies, he went to the Michigan University at Ann Arbor until 1947 when he moved to newly-created state Pakistan. He completed his graduation from Punjab University (PU). He also briefly studied at Harvard School of Business, which later helped him in creating a business institution in Pakistan.

He created and grew Packages Ltd, Milkpak Ltd, Tri-pack Films, and the IGI Group. He brought several foreign companies to Pakistan, including Nestle (Switzerland), Tetrapak (Sweden) and serves on the board of Coca Cola Pakistan, Siemens Pakistan, and Sanofi-Aventis.

He also promoted the cause of the World Wide Fund (WWF) for Nature where he served in various positions, both in Pakistan and internationally, from 1972 to 1996. He was the international president of WWF from 1996 to 1999, succeeding Prince Philip, Duke of Edinburgh.

The American Academy of Art and Sciences was founded during the American Revolution by John Adams, John Hancock, James Bowdoin, and other Founding Fathers of the United States.

SriLanka under emergency after 185 casualties and several injuries after multiple blasts!