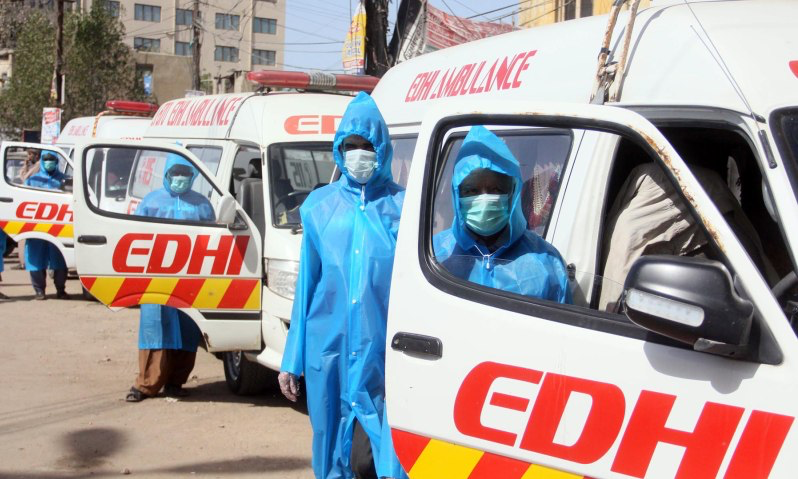 Almost all the bodies were of elderly people who reported breathing problems, he said. However, he clarified that it cannot be conclusively said that these people had the coronavirus.

But Edhi said many medical illnesses result in breathing problems towards the end. He partly attributed the rise in the number of deaths to the closure of OPDs across the city.

People aren’t being treated, he said, agreeing that people are also too scared to go to hospitals.

Indus Hospital’s Dr Abdul Bari Khan said in the past three to four days they have recorded six coronavirus deaths at his hospital — two bodies were brought to the hospital and four people on the brink of death who died in the emergency room. They took swabs from all six bodies and they were all coronavirus positive.

They have now identified their families and tested them for the virus and many have tested positive.

He said they’re obtaining data from the past two years to determine whether this is an unusually high number of deaths.

We must be careful and we must take it seriously, he said. The policy should be to take swab tests from such bodies and treat them as if they have the virus. Their burials should be conducted according to that, he said.

Dr Bari said in the case of these six deaths, they informed the local administration and the proper coronavirus burial SOP was followed. But a situation developed with the families, which he said shouldn’t have happened.

People are understandably upset, he said. But people who are showing symptoms should be brought to the hospital earlier, said Dr Bari, adding that it could save lives. Part of the reason, he believed, why people aren’t coming to hospitals is fear.

All six patients showed breathing problems, he said. All but one were elderly.

He urged people to stay home for the sake of their children and elderly.