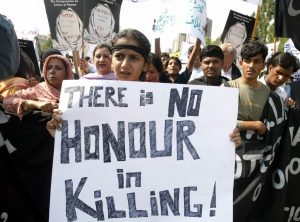 Honor Killing is one of the most common practices across Pakistan. It usually happens when the killers believe that the victim has brought shame upon their family, culture, community and/or religion due to some supposedly unforgivable and unspoken actions in their particular community.

Human rights activists estimate that there are about 1000 honor killings carried out in Pakistan in a single year and these are the ones which are being reported to the police. The harsh reality is that most Honor Killing cases are not even reported to the police and those which are reported, there is no sustainable action from the police in order to prevent such a horrific crime from happening again.

The Psychology behind the crime:

According to research carried out from different Woman rights advocates across Pakistan, the psychology behind the crime is so intertwined in the culture that it might take centuries to cure such a mindset.

It comes as a no-brainer that Pakistani society is a male dominant society, therefore it comes natural to men to think of women as property or objects. Men also tend to associate a lot of respect and honor with women but supposedly for all the wrong reasons.

Pakistan is shaped up with about 60-70% rural community, a community which does not believe in anything other than ‘Honor’.  Losing health, losing wealth is not as big a deal as losing dignity, respect and honor in the eyes of other people.

It is true that no crime can be justified whatsoever, but Honor Killings can happen due to such small and petty reasons that it makes the crime even more disgusting.

Can you even imagine that marrying someone of your choice can lead to you being slaughtered brutally? Apparently that is one of the most leading causes for Honor Killings.

A concept that is so determined by religious and cultural beliefs that it shaped people around us to think and act this way but what if they were informed that Religion and the Law as well grants the right to every able and sane individual to make these choices for themselves?

Talking to the opposite gender:

In some certain instances, it has also been reported that women have been killed if they have been seen conversing with the opposite gender. It is a highly reinforced belief that women should remain in isolation and keep the company of women only. They should also be obedient and accept whatever orders are thrown their way without question.

Education is a basic right granted by Religion, Community, Law and Culture. Every man and woman should be able to thrive for education but unfortunately for a lot of women in the rural areas, this is not the case. Men often fear that if women were to gain access to Education, they could start to think for themselves and that could be the downfall of a male dominant society. There have been a few cases where women have gone against the rules of the authoritative male figure in their lives and they have been punished for doing so.

The Law against Honor Killings:

Pakistan has the highest number of documented Honor Killing cases in the world. The phenomenon has gained worldwide media attention in the recent few years and Pakistani officials were desperate to find a way to stop such a horrible crime.

One of the most shaking facts regarding the situation is that Honor Killings were not even recognized as a crime until 2004. Underpressure from the local and international media, the crime was made punishable by 7 years in prison or the death penalty in the most extreme cases. However in the most bizarre fashion, no one was ever convicted under this law. The law granted a special immunity to the killer; that if they could be forgiven from the victim’s family then they would walk free from the crime. The lawmakers obviously failed to understand the gravity of the situation and none of the killers were actually convicted as a result.

Finally the Anti Honor Killing Bill was established which increases the sentence to 12.5 years in prison and in the case of a death penalty, the victims’ family members can forgive the killer but even under this law, the crime goes highly undetectable in the rural areas of Pakistan.

Understandably, Honor Killing is one of the most vile and disgusting crimes that can ever be committed. Lawmakers, Police, Rangers and other authoritative organizations should come together and create a reform that prevents such a crime from happening again.

Why is it that a public execution is still out of the question for these monsters? Why do we have to follow the standards set by the Western Media and Law for our countries?

I believe public execution for such crimes is the only way through which these crimes can see a decline. Otherwise Pakistani women will continue to suffer in the false sense of honor/religion/community and whatever reason anyone could find.

This plant from your garden can benefit you in many ways!

The Invention Of Sound Jacket Is A New Hope For Deaf People! Find Out Here.

Apple to set its Mac pro production in austin..

Dean Jones explains why someone had phone in Kings dugout