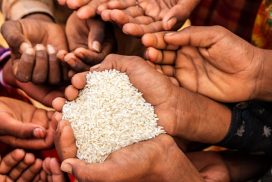 As we are progressing in this era, the world is facing some tremendous developments concerning technology, innovation in science among other things. On the other side of the table, climate change and global warming exists and it is causing many challenges. One of the challenges faced by humanity is food insecurity.

Food insecurity is a situation when one person or family is not sure whether they will be able to afford or acquire nutritional food for the day, two days or for the week. Food insecurity increases hunger, unhealthy food and it poses serious economic, social, and cultural implications for the people. Food insecurity also occurs due to higher food prices, which also affect and increases the risk of democratic breakdown, protest, and conflict between the citizens.

Writer Julian Cribb has published books regarding the climate challenges faced by humanity, few of them are The Coming Famine, Poisoned Planet and How to Survive the 21st Century. In his book “The Coming Famine: The Global Food Crisis and What We Can Do to Avoid”, the author has mentioned about global food shortage which will hit by mid-century, where developed countries will be able to survive this hit however underdeveloped countries like Pakistan are going to face the worst food crises.

Food insecurity and shortage of food is becoming a major challenge in Pakistan, especially in this era. As per the report of SBP in 2019 (third-quarter), they have warned about the food shortage in Pakistan due to the population growth and climate change as climate change is affecting Pakistan’s agricultural productivity. If the precautions measures are not ensured by the officials, any country might be heading towards the Malthusian Theory of Population, which states that population growth is exponential whereas food supply is linear.

As per the National Nutritional Survey 2018 which is conducted Ministry of Health with the help of  UNESCO, Households are 63.1% food secure in Pakistan, despite of being exporters of major staples. Province wise, Gilgit Baltistan takes the lead in food security which is around 75.6%, followed by KPK 70.9%. In Balochistan, the food security rate is 50.3% whereas severe food insecurity is around 35.3%, followed by Sindh where severe food insecurity rate is 26%.

The above-mentioned statistics show that despite being a major player in agriculture exports, Pakistan still faces the issue of food insecurity, where the rate increases especially in rural areas where the availability of food is less as compared to urban areas. Food security is having enough nutritional food available to the household. The report also puts a light on nutritional status of children under 5 years of age, where Prevalence of Malnutrition is about 40.2% are stunted, 17.7% are stunted, 28.9% are underweight and 9.5% are overweight.

The sum of food lost and food waste is defined as Food Wastage. In 2019, Pakistan rank is 94th out of 117th countries which have been qualified, with a score of 28.5. This means that Pakistan ranks the country with “Serious hunger” problem. One of the reasons for this ranking is the extreme weather conditions, the experts in the agriculture sector are also predicting that the food loss in the country will increase due to the upcoming condition.

If we look over the food wastage in different events, the food is most likely to be wasted during wedding ceremonies, where due to the wrong calculation of incoming guests the food got wasted. Another reason is the wedding mostly taking place during night time. Due to this resources like power, traffic, rush is increased. The fact of people getting hungrier at night result in more food wastage due to excessive food in their plates.

Another event is restaurants where the food is wasted as the restaurant chefs sometimes prepared the meal before the order due to the demand of orders and sometimes the customer orders the food for dine-in, waste it due to amount of food present in the plate which is fixed and it goes to waste indefinitely. Even if the customers pack the food for later eating, sometimes they throw it away too.

But it all starts from our homes too, where most of the time excessive last meal food we either throw it away or give it to needy people around us. But the point remains the same that we are giving stale food to the people around us instead of fresh food which may contain dangerous amounts of harmful bacteria.

One example is of Bangladesh, where the population density was around 900 people / square km, where the world thought they might be the case of Malthusian. But Bangladesh put extensive efforts on communication to the citizen awareness, policies, procedures and programmes like family planning to control population, which also impacted their food security problem. Pakistan is also facing a problem similar to this and despite being leaders of agricultural, the country is losing the lead due to climate change.

As we are aware by the current situation of COVID-19, where the poor are getting poorer due to pandemic situation around the globe, getting access to food is getting problematic especially around designated times where the rush will be increased. We can play our part against hunger and food insecurity by not wasting the food instead reach out to the authorities if have excessive foods (like Saylani, Action Against Hunger, WFP, ACTED). Government/NGO’s are also playing their part by collecting the food and distributing to the needy.

Government of Pakistan can also enforce laws like shutting the wedding early or reschedule wedding during day time which can also benefit other resources.

One last contribution of Sushant Singh in Bollywood

Is Maryam Nawaz planning to be an influencer for the Nation?

Ali Gul Pir opened up about divorce and broken families. find out here!