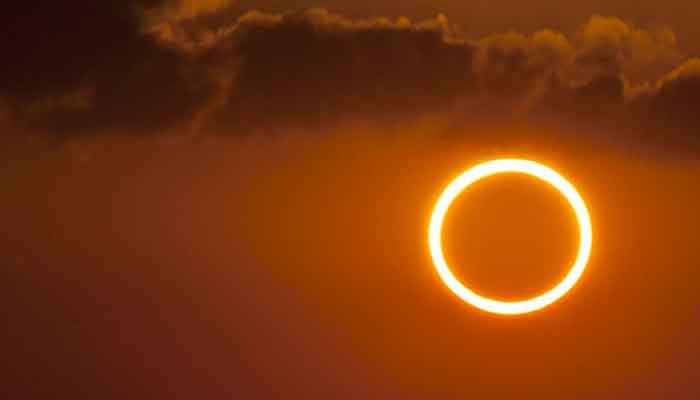 A solar eclipse, or suraj grahan is set to occur on June 21 and would be visible in some cities across the country, the Pakistan Meteorological Department (PMD) Climate Data Processing Centre has said in a statement.

According to the centre, “an annular solar eclipse happens when the moon covers the sun’s centre, leaving the sun’s visible outer edges to form a ‘ring of fire’ or annulus around the moon”.

The partial eclipse begins at 08:46am local time and ends at 2:34pm with the greatest eclipse occuring at 11:40am, according to the PMD.

According to the information provided it is indicated that people living in Islamabad, Lahore, Karachi, Peshawar, Quetta, Gilgit, Muzaffarabad, Sukkur, and Gwadar could witness the eclipse at various partial levels, with only those in Sukkur to see the annular eclipse in almost its entirety — with a solar coverage of 98.78%.

Gilgit would have the least solar coverage in the eclipse, at 74.88%, the centre added.

The PMD noted that apart from Pakistan, the solar eclipse would also be visible in parts of Africa — including the Central African Republic, Democratic Republic of the Congo (DRC), and Ethiopia — as well as India and China.

Punjab to open restaurants, parks after Eid despite soaring infections!