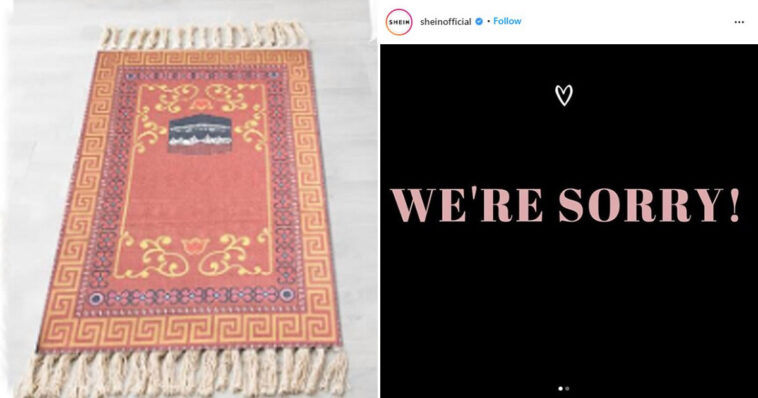 A Chinese retailer Shein last week sparked public outrage after one of their items was recently launched. Apparently, the brand was selling Muslim prayer mats as casual rugs and people were using them for decorative purposes.

Many consumers, influencers, and Muslims raised their voices against Shein’s pathetic attempt at cultural appropriation. They expressed their disappointment in the brand for hurting the islamic faith.

UPDATE: @sheinofficial has now removed most of these items from their website, which is what we wanted; however there’s been no acknowledgement, statement or apology from them. . I am disgusted. I am livid. @sheinofficial is also PROFITING off muslim prayer mats (janemaz/sajadah) by selling them as ‘fringe trim carpets’ for people to use casually around the house. A few have the Kaaba printed on them. THIS IS HIGHLY OFFENSIVE, Not only is it disrespectful but they once again renamed and stole credit from a whole faith this time, by failing to label it as a muslim prayer mat; which allows people to use it casually as a decorative mat. *A prayer mat is an important piece of fabric, used by Muslims, placed between the ground and the worshipper during their five daily prayers. It is NOT a carpet and must be treated with respect and you don’t ever wear shoes on it. It’s important for us to acknowledge the disrespect that is committed here, and that action must be taken to remove this product from their line. Corporate organisations can be difficult to take down, but you can do your bit by: -BOYCOTTING THEM -RAISING SOCIAL MEDIA AWARENESS (can really make a difference) – SENDING EMAILS . They are a company based in china, which makes it more difficult to take certain actions, therefore tagging and raising awareness which will enable people to boycott them is the way forward until they take down the items, acknowledge and apologise. If anyone has any ideas of what more we can do, DM me. . Thanks to @toobzz__ for bringing my attention to this. . #shein #sheinofficial #muslim #prayermat #culturalappropriation #islam #china

I’ve reached out to the brand directly asking them to remove + to have a dialogue on why this is wildly offensive.

Will update with their response. pic.twitter.com/zktW90VnBQ

for all of you who order off of shein; they’re taking muslim clothing / prayer mats and labelling them as ‘tassel rugs’ as well as exploiting their workers and paying them less than minimum wage. they’re making money off of cultural clothing & traditions and its absolutely vile+ pic.twitter.com/bPkBD0fWvy

After receiving the public backlash, Shein removed the products from their website and publicly apologized as it was a ‘highly offensive oversight’ on their part.

“To our community – we made a serious mistake recently by selling prayer mats as decorative rugs on our site. We understand this was a highly offensive oversight and are truly sorry.”

To our community💌 We’re sorry.

“Since it was brought to our attention, we immediately removed the products from our website and asked our vendor to stop selling to others.”

Shein also says that they have formed a product review community with staff members from different cultures and religions to make sure this doesn’t happen again.

“As a global brand, we vow to do much better in educating ourselves on different cultures, religions and traditions to ensure our diverse community is respected and honored. We offer our sincerest apologies to all whom we have hurt and offended and hope we can earn your forgiveness.”

These restaurants let you dine in your car