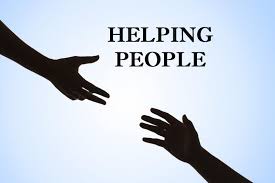 “The purpose of life is not to be happy. It is to be useful, to be
honorable, to be compassionate, and to have it make some difference that you have lived and lived well.”

-Ralph Waldo Emerson
This world is a much diversified place; some are blessed with health, some with wealth and so on. Blessings can be defined in scores of ways but that depends on every individual’s perspective. In the world that we live in, all the living creatures face numerous problems in
everyday life but helping others and the thought of getting help has kept the spirit alive till today. Humans have faced many disasters and world catastrophes from events like London’s fog which was caused by coal powered heaters, The Minamata disease in Japan caused by mercury poisoning or the Bhopal gas leak in India caused by a chemical leak. These were some examples of man-made disasters which had an everlasting effect on the mankind. In the race of new technology and science, humans have paid a cost in numerous ways.

Man has survived until now by complimenting one another in trying times. We have witnessed many great philanthropists, NGO’s and other organizations working to help the people in need. Man is a social animals and the spirit of helping one another keeps them bound an connected to each other, keeping in mind help does not mean nepotism, the literal meaning of help is ‘aid’ or ‘improve the condition of’. The current situation of the world where we are witnessing Covid-19 is dominating the world, leaving Man with not many options to survive. Earth has witnessed that since every continent, country and region is affected by this pandemic, humans are still helping one another to fight this virus and to live the standard life they would before the Corona Virus.

All the religions preach help in their holy books, this is a divine act which is ought to be the gateway to heaven. In Bible it states in the Corinthians 12:28 ‘God has placed in the church first
of all apostles, second prophets, third teachers, then miracles, then gifts of healing, of helping, of guidance, and of different kinds of tongues’. And in Quran it states in the verse (5:2) ‘In the
Quran, Allah (swt) says: “Help one another in acts of piety and righteousness. And do not assist each other in acts of sinfulness and transgression. And be aware of Allah. Verily, Allah is severe
in punishment”.Humans face hardships in their lives, they are prone to get hurt and feel helpless, and at that time it is the sense of belongingness and the spirit of help that comes as a blessing in the society.

Human’s can seek help from one another in trying times but unfortunately if it were so we would have a better world today without hunger, starvation and poverty. The reason behind it is some
personal agendas or political will, which makes a man selfish hence resulting in a loss for other humans. The statistic show that there is 7 billion of population on Earth and the food that is being produce can feed every one of them.

Our total production is to feed 10 billion people, which means 1.5x more food for the total population. We are well aware of the situation that is being faced by the humans around the globe, which is also a part of the SDG’s. The statistics show that one in nine of the total world population suffers from hunger regularly. Recent studies tell us that the Hunger and Poverty are related to one another, instead of producing more food that is needed to feed the world; people
are not able to buy the food due to poverty. On the other hand UN states that the world wastes around 2.9 trillion pound of food every year, yes you can imagine that humans are capable of doing almost anything. We have food to waste; we are producing more than the world needs.

Who is to blame?

Humans really are social animals; we know the whereabouts and well being of each other. Every individual need to play their part in conserving food, helping those in need. It is not difficult to
identify the people living under the poverty, and as mentioned earlier poverty and hunger compliments one another. Those who are privileged should help the poor so that every single one
of us contributes to this global issue that humans are still facing in the 21 st century. The system is to be blamed too but what if we can make a difference by our own hands? Saving the food and
not letting it waste, helping the poor with the food will certainly lower the global number of those who are undernourished, every hand counts in fighting and eradicating this global issue.

Is social media a social aid or hinderance?

This group did thanksgiving on train with random people, find out here!