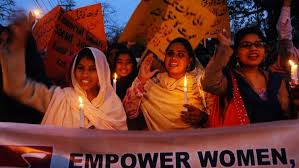 Gone are the days when one was not constantly threatened for their safety. The days when the words ‘home’ and ‘family’ meant a safe place, a place where you could seek refuge from all the chaos. It is a shame to admit that society has reached such a low that one no longer feels safe at home.

Here’s a reality check; statistically speaking at least 5000 women are killed each year that are subject to abuse, and this does not include the number of which are maimed, injured or disabled. Furthermore, a study carried on a sample of 218 women- 97% of who confirmed that they were subjected to some form of assault ranging from verbal/physical/mental abuse, marital rape, domestic violence and the list goes on. In Pakistan, we commonly hear about Female Domestic Violence (FDV) instead of Male Domestic Violence (MDV), however, cases for both are multiplying rather quickly.

It is important to identify that the root cause for the commonality of such vile acts lies within our society. It is our culture; highly patriarchal, overflowing with pride and denial. We fail to realize that the society in Pakistan is extremely patriarchal and most women are viewed as prized possessions instead of living breathing creatures, let alone human beings. This is not only the case in many rural areas but also with several people living in the cities.

Their upbringing is at fault, the lack of awareness and literacy in the population is what gives rise to such mindsets. The illiterate are nurtured with ideas that the role of a woman is nothing more than a caretaker and a child bearer, if she dare try to step out of these roles she is considered rebellious and spoilt and must be punished or put into place. They are brainwashed into believing that their pride/reputation is more important than the human itself, which is why beating and honor killings are rather common. One in every five homicides in Pakistan are related to honor killings, every four years there are approximately 2000 honor killings in Pakistan, 92% of which are done due to a marital dispute by the spouse.

Last year in Shahdara Town, Lahore, a woman was severely tortured by her husband and in-laws due to her not being wedded off with hefty dowry. Rimsha belonged to a poor family and she reported that ever since she was married her in-laws began to demand several items, the latest being a motorcycle. However, due to her family’s financial position they were unable to meet their demand which is why her husband along with her in-laws began to torment her every day, such that her entire face was swollen. The police on the other hand remained calm about this situation, since domestic violence is considered a private matter in our society and the people would prefer to remain quiet about it rather than addressing how cruel it is, the SHO claimed that a FIR was submitted but they are yet to hear about the whereabouts of the culprits and could not do anything else about the case, it was in the hands of the investigative team.

Moreover, violence or abuse is not only limited to the illiterate we have seen many cases of these incidents which involved rather well-known personalities, one of which being the constant physical and psychological abuse Tehmina Durrani went through by her then-husband Mustafa Khar, for most of their married life.  Another in most recent times being the case of domestic violence against Mohsin Abbas Haider for physically assaulting his wife and severely traumatizing her.

The problem lies within the people themselves, they are manipulated into believing that in order to discipline the women in their lives for whatever ‘wrong’ they did, they need to be punished. Punishes involving physical assault because how else will you make sure that your wife does not repeat the mistake until you give her a good beating? Sadly, this is what the majority of Pakistani men and not only men but families believe in. It is instilled within them to such an extent that in most cases women refrain from reporting abuse in order to protect their family’s honor, or in some cases they believe that they somehow deserved what was happening to them since this is what they’ve learnt from their ancestors that they must be patient and learn to compromise in all situations. They are taught not to speak back, quietly obey all orders and if they choose to rebel, they deserved to be hurt.

It is truly horrific to see what Pakistan has come to in such short time; being ranked one of the most dangerous countries to live in for women. Where the law or government could barely be bothered with prevailing problems and justice for women against abuse as it is considered unnecessary.

Their cries are hushed by the taunts of “what will people say?” This is supposed to be a family matter and it need not gain any public attention. Instead of encouraging our women to stand up against their abusers they are shushed, asked to withdraw their cases, ridiculed, shamed, and humiliated to such an extent that they are left helpless.

Such an example would be the two finger test that every rape victim must go through, which is nothing but absurd! It is offensive and highly embarrassing for a victim to have to prove their claim by such tests. It is the state’s responsibility to derive better measures and protocols to ensure legitimacy.

What we need is that the government reinforce their bills and make sure there are strict policies drafted which must be followed by all under all circumstances without any loopholes and that one who does not abide by these laws is punished severely. Like the recent bill passed in Punjab in Feb 2016against the Protection and Prevention of Domestic Abuse. Women are supposed feel empowered not terrified and used to of abuse, to be encouraged to speak for themselves and report injustice.

We, as a nation, need to create awareness amongst the population of how important it is to provide basic human rights and whatever we’ve been taught so far is inhumane and utterly wrong in order to eradicate this plague which is consuming our society.

Emmy Awards to be held virtually this year!

From blood to happiness – Let’s change the way we celebrate Eid this year!

Nike admits penalizing athletes when they got pregnant