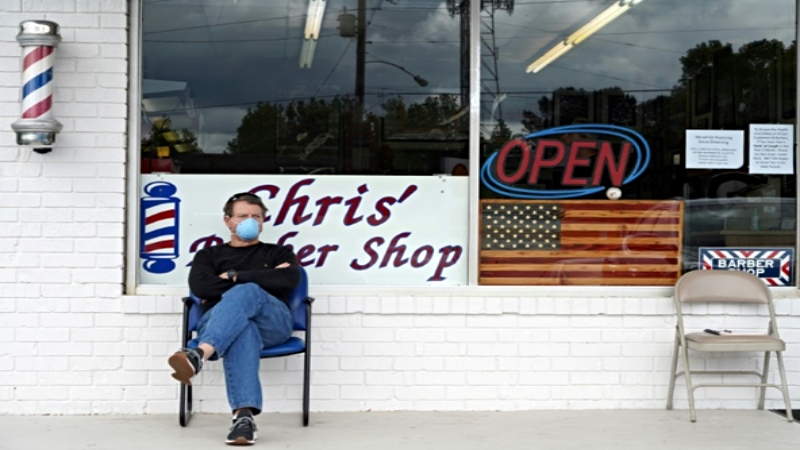 Gyms, hair salons and tattoo parlors had a green light to reopen Friday in the state of Georgia as the United States surpassed the grim milestone of 50,000 deaths from the coronavirus pandemic.

As the southern state lifted restrictions on a list of businesses that also included nail salons and bowling alleys, President Donald Trump warned that Governor Brian Kemp may be moving too fast.

At the same time, Trump said he had told Kemp, a Republican ally, “to do what is right for the great people of Georgia (& USA)!”

The mixed messaging was the latest from a president whose remarks from the White House podium have frequently raised eyebrows, including most recently a suggestion that disinfectant could be injected to treat patients with COVID-19.

Trump sought to walk back his disinfectant comments on Friday, claiming somewhat unconvincingly that he had been speaking “sarcastically.”

Chris Edwards, owner of the Peachtree Battle Barber Shop, said he was “happy” about being allowed to reopen his store in an Atlanta strip mall, where most businesses nevertheless remained closed.

“I’m a small businessman,” Edwards told AFP as he gave a trim to a middle-aged man.

Edwards was wearing a mask, but the customer was not. Since opening at 7:00 am the barber said he had five or six clients.

Rob Flat, owner of Tried & True Tattoo a few blocks away, said he was only taking appointments, not walk-ins, but had not had any customers yet.

“We’re definitely looking forward to opening, but we want to be responsible,” Flat said.

Kemp’s reopening plan — which requires people to wear masks and establishments to check customers for symptoms — has met with criticism from some business owners and residents in the Peach State who voiced fears it is too soon.

Several businesses with permission to open, including some fitness centers and hair salons, remained shuttered in Atlanta Friday.

“Believe in Science, Not Kemp,” said a sign displayed by a person who honked repeatedly while driving past the governor’s mansion. “Stay Home, Stay Safe,” read another.

One man raised his middle finger towards the mansion as he drove past.

Eden Lio, a restaurant hostess and bookbinder who lost both her jobs in the crisis, was nonetheless participating in the rolling protest.

“We’re going to get more sick if we open today,” the 20-year-old said through her cloth mask. “We’re not ready at all.”

“There is nothing essential about going to a bowling alley or giving a manicure in the middle of a pandemic,” she told ABC News in a denunciation of Kemp’s order.

With the state’s infection numbers and deaths rising, she said it was “irresponsible” to allow businesses to open now.

The United States is the country hardest-hit by the virus, with more than 890,000 confirmed cases and 51,017 deaths as of late Friday afternoon, according to a toll by Johns Hopkins University.

Mehreen Jabbar takes us back to 2009 drama ‘Malal’