Prime Minister Imran Khan spoke to the United Nations General Assembly this yesterday. Mijito Vinito packed his papers and left the papers as soon as the pre-recorded statement of Imran Khan was played in the assembly.

In that video, Imran Khan criticized the Indian Prime minister for supporting the ideology of religious extremist group RSS. Imran Khan claimed RSS and Modi are the main actors marginalizing the minorities especially Muslims in India.

Moreover, Imran Khan also addressed the issue of Kashmir by taking note of atrocities committed by Indian forces in the Indian Illegally Occupied Kashmir (IIOJK). He urged the government of India to end the military siege in Kashmir and discuss the issue bilaterally. 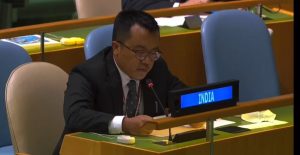 According to a report by Hindustan Times, Mijito Vinito who is an Indian diplomat serving since 2010, left the UNGA as soon as the speech of Imran Khan was played overhead.

TS Tirumurti is a permanent representative of India to the UN who has tweeted to use the ‘Right to Reply’ facility to respond to the statement of Imran Khan. He regarded Imran Khan’s statement as a vicious falsehood and personal attack.

#BREAKING : #Indian Diplomat, Mijito Vinito walks out of the General Assembly hall of the @UN as soon as prime minister of pakistan starts speaking. pic.twitter.com/S7oaT0DelQ

Narendra Modi is expected to address the assembly through the video statement today.