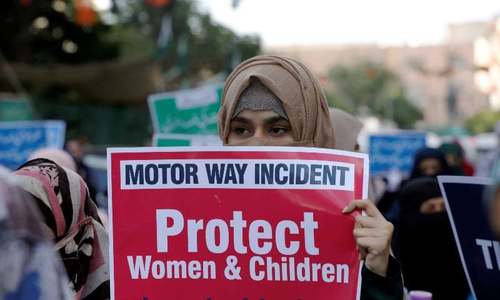 Abid Malhi, the prime suspect in the motorway rape case, revealed details of how he had managed to hide from the law for almost a month before he got caught by police on Monday evening.

According to sources, Malhi revealed to police that he spent a month travelling through various cities in Punjab by using public transport, wearing a mask over his face.

The motorway rape prime suspect revealed that he fled to Nankana Sahib after allegedly raping the woman while his accomplice, Shafqat, escaped to Dialpur.

With the police on his trail, Malhi escaped from Nankana Sahib and went to Bahawalpur, where he managed to evade the police and avoid recognition by wearing a mask over his face.

“I travelled through various cities in public transport,” sources quoted the suspect as saying, adding that he ultimately got caught after he ran out of money and was forced to contact his wife.

“Me, Shafqat and Bala Mistri went [to the highway] to commit robberies near Karol village,” he said, according to sources. “Mistri did not proceed with us. However, Shafqat and I went towards the jungle in Karol.”

Malhi disclosed that he and Shafqat robbed two to three truck drivers near Karol village near the motorway, before they sexually assaulted the woman.

He said that the car’s flashing indicators caught his attention and upon seeing a woman inside, Malhi told her to come out. Confirming initial reports of the crime that had been reported in media, he said when the woman refused to come out of the car, he broke the vehicle’s window and dragged her outside.

“After robbing the woman of her watch, jewellery and money, we told her to go down the motorway,” he said, according to sources. “When the woman refused to do so, we took her children off the motorway, and the woman followed to protect them.”

Read more: ATC approves 14-day judicial remand of Lahore motorway gang rape suspect
Malhi then revealed that the suspects gang-raped the woman when she came down the motorway to protect her children. The suspect revealed that he and his accomplice fled when the Dolphin Police force arrived and fired shots into the air.

In some countries doctors are thrown out due to virus fears, find out more!