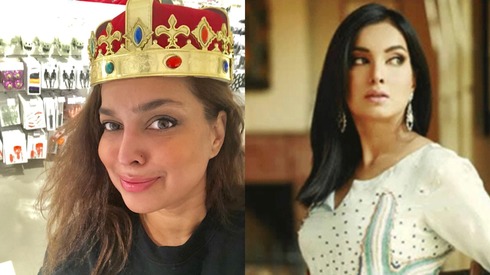 Pakistani models are not generally known for being the most thoughtful people out there, and two of them have now been called out for body-shaming a former supermodel.

One of Pakistan’s first supermodels, Aminah Haq, personally shut down fellow models Amina Ilyas and Sadaf Kanwal for their insensitive and crude behaviour in a recent Instagram post.

Her reaction came after an old clip of the two younger starlets body-shaming Aminah Haq on national television did the rounds.

The two had apparently been playing a guessing game on fashion designer Hassan Sheheryar Yasin’s talk show when Ilyas asked Kanwal to guess who she was talking about when she described a certain model who has gained weight.

She then high-fived Kanwal when she guessed the name right.

The video clip had recently made the rounds on social media, prompting many to express disgust at the ignorant behaviour of two celebrated models.

However, tackling it with grace, Haq recently responded to the controversy saying that “unhappy people tend to gravitate towards hate instead of kindness and compassion.”

“A few of you have tagged me in something a model/actress said about me. Truth be told, if body shaming me brought some small shred of joy in her life, then you’re welcome!” the former model wrote in her Instagram story.

Ayeza Khan turns 29, Happy Birthday to the queen of hearts