In the past two months, Pakistan has reached a coronavirus positivity rate of 2.58% on October 21. According to the official tally, on Wednesday of the 28,534 tests sampled, 736 came back positive.

Government officials have expressed concern about the rising positivity ratio in the country, even though it is still below the 5% threshold set by the World Health Organisation (WHO).

Last week, Asad Umar, the minister for planning and development, called it “unmistakable signs of rising of coronavirus” when the positivity hit 2.37% on October 15.

However, on Wednesday, the positivity percentage further hiked up to 2.58%. The last time Pakistan reported a percentage higher than this was on August 19 at 2.68%.

Also in the last three days, Pakistan had been reporting deaths in double digits every day, unlike in September when the death toll stayed largely in single digits.

While of the 883 virus-related hospitalisations in the country, 67% are in critical condition, notes the WHO in a report. 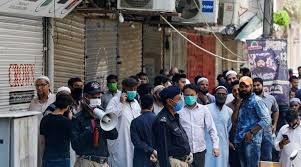 This graffiti artists join fight against coronavirus, find out here!

How coronavirus pandemic could change our movie industry!

What should be the objectives for Karachi after the Covid-19 crisis is over?

HEALTH IS THE REAL WEALTH!

UK Government gives approval for the use...