Khabib who made an impressive victory with 29-0 announced his retirement as his father and coach died in July due to complications caused by Covid-19. Khabib Nurmagomedov announced this after winning the fight against Gaethje in Yas Island, Abu Dhabi. 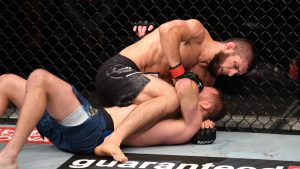 According to Khabib, he was talking about this with his mother for days as he felt he could not fight anymore without his father being with him. He said that he promised his mother that it was going to be his last fight and now it was his duty to keep his words.

The last fight of Khabib took place at Yas Island in Abu Dhabi where he faced Gaethje on Saturday night.

Pakistani are not big fans of mixed martial arts (MMA) but Khabib made himself the sensation of the Muslim world by his victories throughout his career as a fighter.

‘How far will they go to win election?’ PM Imran on ‘moral bankruptcy’ of Israel, India leaders