Pari Gul Tareen sets her mark in the history! In the world of today, where women empowerment has been trending and girls are now taking stand for themselves or at least trying to. We have news for you!

Extremely overwhelmed to announce that Pari Gul, who is the first ever female who has been appointed as the ASP (Assistant Superintendent of Police) in Quetta, Balochistan. There was no female police officer ever before Pari Gul in Quetta.

Moreover, Pari Gul Tareen is also the first person in her family who has joined in the police and the sole reason she gave for joining it is that she loves the uniform.. 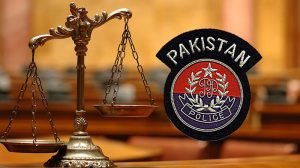 Pakistan’s first-ever motorsports arena all set to be build!

‘You’ Season 3: Everything We Know So Far

Poisonous milk being sold by milkmen in Hyderabad

Saad Hayat marks his return as a...

EMPTY VESSEL MAKES THE MOST NOISE!