Imran’s government wants to stop Pakistan’s Democratic Movements’ three-phased strategy against the current government. PTI is of the view that political parties and PDM should not arrange public gatherings and Jalsas because it can become the coronavirus reason.

Rana Sanaullah said in a press conference in Gujranwala that the current government is more dangerous than the Covid-19 because it has caused more harm to the country.

The opposition wants to take a stand against the government while maintaining peace in the country. However, Sanaullah said that if any authority tried to stop the Jalsa which is being held tomorrow in Gujranwala, then the government will be responsible for the violence. 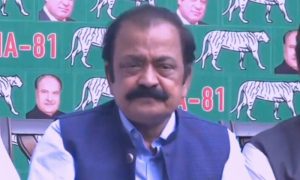 The opposition seems determined against the government. The jalsa being held by PDM in Gujranwala will be attended by all the 11 parties which are part of PDM.

What is the number one thing everyone on Twitter is talking about?

No Blood in Blood Banks or the Global Pandemic: Which is More Dangerous?

Speeding Past Stereotypes: foodpanda and Women on Wheels partner to empower Women in Pakistan