Imran lauded the debt relief measures, by G20 countries, the International Monetary Fund (IMF) and the World Bank for developing countries, providing one-year breather for Pakistan to pay back loans, after Finance Advisor Dr Abdul Hafeez Sheikh informed him during a meeting about the planned approval of an additional $1.4 billion concessionary financing from the IMF to deal with the economic impact of coronavirus.

In its meeting in the Saudi capital of Riyadh on Wednesday, the G-20 included Pakistan in the group of countries eligible for debt relief on all principal and interest payments. The World Bank and the International Monetary Fund (IMF) had urged the G20 to extend debt relief to the poorest countries to free up their resources enabling them to fight the COVID-19. 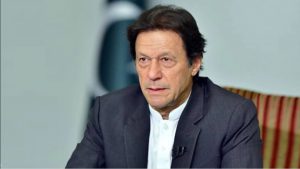 All debt service falling due in this period will be packaged into a new loan on which the payments will not start until June 2022. The loans would be payable in three years. The G20 countries will consult with the IMF and World Bank on whether the suspension period should be extended to June 2021 or not, depending on how the COVID related challenges are shaping up by then.

Meanwhile, Foreign Minister Shah Mehmood Qureshi welcomed the G-20 countries’ decision to give major relief to 76 developing countries as ‘historic’ saying the relief should be inclusive and without ‘onerous conditionalities’. The announcement comes as Pakistan faces nearly 7,000 cases of confirmed coronavirus cases with over 100 deaths.

All bilateral official creditors will be part of this latest initiative, which sees $20 billion of immediate liquidity to support the health systems of poor nations. Pakistan has also called for international unity and asked US President Donald Trump to review his decision of suspending the World Health Organisation (WHO) funds.

“It is my personal view, but I think they should review it, as this is a time for us to unite and join our heads together. The WHO has a lot of responsibilities at the moment. Cutting off their funding will only add to their burden,” he said. This particular G-20 debt relief pertains to all principal and interest payments, starting from May 1 and will continue till Dec 1, 2020, but Qureshi hinted that it could go beyond December.

“The developing world lacks fiscal space and a proper health system. Therefore, the most appropriate response that other countries can give at the moment is granting debt relief,” he said, adding Pakistan annually spends $10 to $12 billion alone on debt servicing.

Qureshi said it was Prime Minister Imran Khan who had first appealed to the leaders of rich countries, the UN secretary general and heads of financial institutions, to give debt relief to developing countries such as Pakistan so that they could combat COVID-19.

Qureshi said he had written letters and spoken to 30 foreign ministers over the past few weeks, seeking their help for Prime Minister Imran’s global initiative for debt relief. 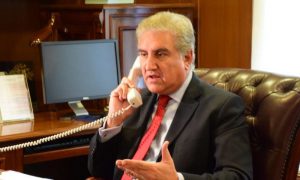 On Thursday, the foreign minister also met with Ms. Teresa Daban Sanchez, Resident Representative of IMF in Pakistan, who called on him at the Foreign Office. “The foreign minister welcomed the announcements by G20, IMF, World Bank and others on debt service suspension initiative for debt stressed countries.

Earlier, China’s State Councillor and Foreign Minister Wang Yi spoke to Qureshi saying they would continue to provide all possible support to Pakistan amid the coronavirus crisis.

Wang Yi said the Chinese government had provided Pakistan with multiple batches of material assistance, and had also dispatched medical expert groups to hold expert video conferences to share prevention and treatment experience. Qureshi expressed gratitude to China for its valuable support to Pakistan’s fight against the virus. “Faced with this unprecedented global public health and economic crisis, China’s measures are precise and powerful, and have achieved positive results. Pakistan appreciates this,” he added.

Commenting on the process of bringing back stranded Pakistanis, Qureshi said in the first week around 2,000 nationals were being brought back while the coming week will see an increase to up to 7,000. 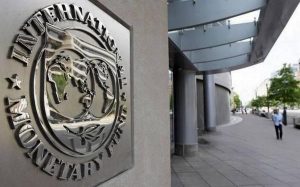 The facility is a revolving and renewable backstop for member countries with very strong policies and fundamentals in need of short-term moderate balance of payments support, she said in a press statement on Thursday.

In these cases, the Short-term Liquidity Line will provide revolving access of up to 145 percent of quota, she added.

Complementing other instruments during the current crisis, the facility will fill a critical gap in the Fund’s toolkit and help to facilitate a more efficient allocation of resources,” the statement added.

Meanwhile, the State Bank of Pakistan (SBP) slashed the interest rate by 200 basis points, bringing it down to 9% from 11%.

The decision was announced in a Monetary Policy Statement issued by the central bank in which it stated that the decision had been taken as the “global and domestic outlook has further deteriorated” due to the coronavirus pandemic.

“The MPC was of the view that this action would cushion the impact of the Coronavirus shock on growth and employment, including by easing borrowing costs and the debt service burden of households and firms, while also maintaining financial stability. It would also help ensure that economic activity is better placed to recover when the pandemic subsides,” read the statement from the SBP.

The SBP noted that its measures would help provide support to economy similar to the recent steps taken by the central bank, which included an employment scheme.

According to the scheme, companies that do not lay off their workers will be able to avail themselves of loans at cheap interest rates.

The SBP’s measures to regulate economic activity include the provision of facilities of a one-year extension in principal payments, doubling of the period for rescheduling of loans from 90 to 180 days, and concessional financing for hospitals and medical centres incurring expenses to combat the coronavirus pandemic. This is the second time that the interest rate has been reduced by the SBP in one month.

The central bank has cut the interest rate by 4.25% in one month to cope with the coronavirus which has adversely impacted businesses globally and in Pakistan. On April 10, SBP Governor Reza Baqir had indicated that the central bank will cut the interest rate in the days to come. Baqir had appeared on Geo News’ programme ‘Aaj Shahzeb Khanzada Ke Sath’ where he said the SBP was monitoring the situation and will take action regarding the interest rate if it deemed so. “The statistics that we have with us clearly show that inflation is expected to decrease further in the coming days,” he had said.

“As we keep receiving information about the country’s economy, the State Bank will be ready to take action in future about the interest rate,” he added.

Dolly Parton’s whopping net worth will leave you stunned