Shaniera Akram had no idea that posting s picture of hummus and vitawheats, while watching Australian reality TV show would end up her getting asked why she is not fasting.

Akram’s photo featured herself, lying on a couch with a tub of hummus — we’ve all been there — with a caption reading, “as bad as it gets”. She had, as she later realised herself, never been more wrong. The worst was yet to come. 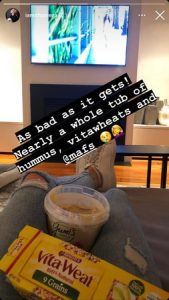 People rushed to her DMs in great numbers, deeply concerned. Their concern: Was Shaniera not fasting?

They bothered her so much that she had to take another break from her lazy couch day watching reality TV to provide a clarification — one which she owes to nobody but herself — that she’s in Australia, where the local time was 8:45pm, so… 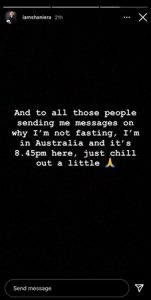 The point here isn’t whether she was bothered or not, the point is why ask? Religion is something very personal and faith and practice are private matters between God and His subject. Where do we get the right to question whether someone is practicing a certain aspect of religion? When are we actually going to learn about all this?

Baaji to screen in Dallas on September 18