Two Australian cricketers became the latest to pull out of the Indian Premier League (IPL) on Monday as pressure grows on the tournament following a devastating coronavirus surge.

India’s veteran spinner Ravichandran Ashwin became the first high-profile player to publicly announced on Sunday his withdrawal from the mega-event ‘to support his family’ during the pandemic. 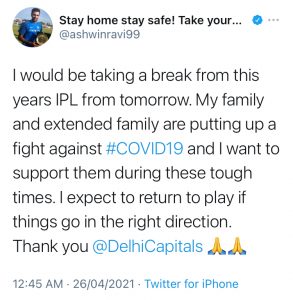 The IPL has attracted criticism for continuing even as India’s health care system reels from 350,000 daily infections and almost 3,000 deaths a day from the virus.

Adam Zampa and Kane Richardson’s franchise Royal Challengers Bangalore (RCB) tweeted that the players are “returning to Australia for personal reasons and will be unavailable for the remainder of #IPL2021”. 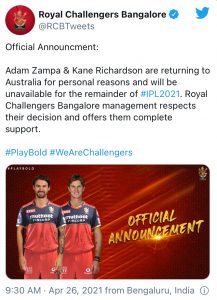 Rajasthan Royals said that their pacer AJ Tye also flew back to Australia on Sunday. 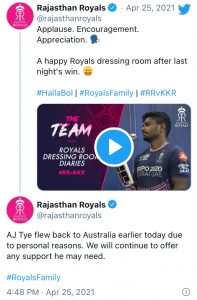 The bowler was quoted by Australian radio station SEN WA that more Australians may follow suit.

“There is a crisis but no panic” – Fawad Chaudhry

China to provide walk through testing machines for coronavirus!