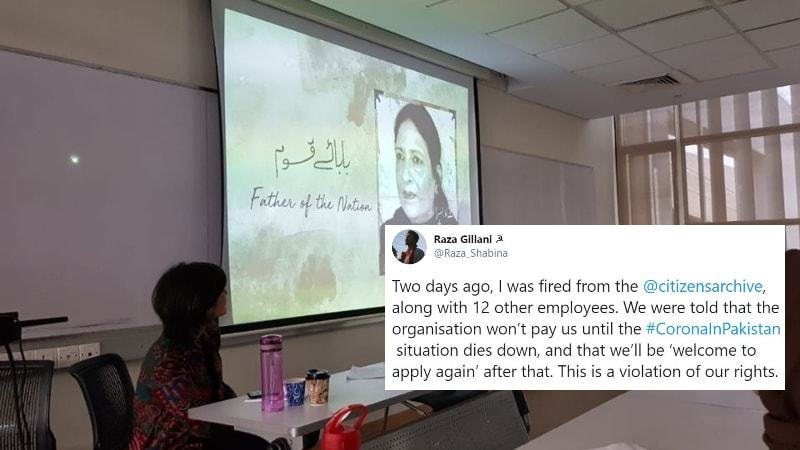 A former employee at Citizens Archive of Pakistan has revealed that he was fired due to the coronavirus lockdown.

Raza Gilani took to Twitter to share that the non-profit had fired 13 employees, including him, without any prior notice.

“We were told that the organisation won’t pay us until the coronavirus situation dies down, and that we’ll be ‘welcome to apply again’ after that. This is a violation of our rights.”

According to Raza, “Our contracts give us the right to have a written termination letter and a month’s notice and salary. But we were fired with immediate effect.”

“And this organisation is being run by someone who grabs Oscars for making films about the most vulnerable people of our social order.”

He further went on to say that, “We were said that the govt had stopped funding. This is nonsense because the govt only funds one project (National History Museum).”

“If downsizing had become so important, why weren’t the directors and those who actually take a hefty salary fired?

“This is morally and legally corrupt practice: making a profit out of a pandemic. Those who made this decision to save their money should be ashamed of their selves.”

He also shared that half an hour after putting the thread up he got a call from HR an that, “All fired employees are receiving emails now. Good that they’ve acknowledge that. But it’s not enough.”

The Citizens Archive of Pakistan released a statement today which does not address the former employee’s statements but talks about the “unprecedented times” the NGO is in.

According to the statement, “CAP relies on the support and funding of donors both private and public to support its core projects.”

They mentioned that they have been struggling for the last several months as they haven’t received six months of payments. Also, their existing grants have been put on hold as well.

“Now that the museum is closed for an indefinite period of time due to the government lockdown for COVID-19 pandemic, as a small non-government organization we are finding it difficult to sustain a large workforce and have had to make some difficult decisions to let some members of our organization go whilst also having to revisit current employees’ remuneration.”

CAP also stated that the terminated employees “will receive their salaries for the month of March 2020 along with an additional month of pay for April 2020 to be paid after their 4 week notice in accordance with their contracts.”

The organisation also claims that should they be back on their feet after the pandemic is over, “employees who have been terminated will be the first we contact in regards to a return to their position.”

Considering the vast spread of Covid-19 across the globe, it is extremely uncertain as to when that may happen.

We understand that firms and organisations can be in a crisis but to suddenly terminate employees without any warning and giving them their notice period two days later post a thread from a former staffer calling them out doesn’t seem fair in such dire times.