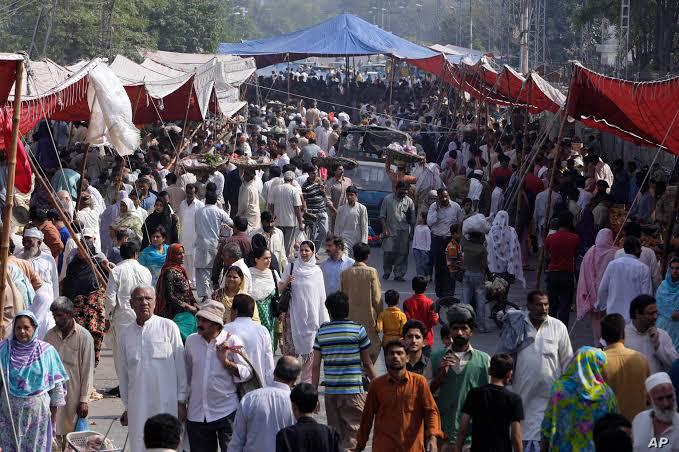 Population growth is a ticking time bomb for Pakistan, with the country having one of the highest birth rates in the world, around 27.4 births per 1,000 people (2020). It was ranked 14th most populous country of the world in 1950 with a population of 33 million but, today it is ranked at the 5th position with a population of around 210 million.

Pakistan makes up only 0.59% of the Earth’s surface, ranking at 34th in terms of land area while residing 2.83% of the entire world’s population. As compared to other states with high populaces, Pakistan takes up the least amount of space. It means that it is dealing with much more dire consequences than the other highly-populated nations because of its lack of space.

Pakistan is struggling with plenty of serious challenges due to overpopulation such as water shortage, unemployment, poverty, a burdened health care, and education systems, scarcity of food supplies, poor law and order situation, and a crippling economy. In terms of the Human Development Index, it has the 154th position in the world. Amongst the countries ranked, Pakistan has the highest population growth rate at around 1.95%, with 3.1 children per family on average.

A lack of political will:

There has been an absence of a coherent approach to overcoming the social and cultural constraints to the usage of family planning in the administration’s efforts to control the conundrum of overpopulation. Frequent changes in the organizational setup of the program, incompetent management, and ineffective communication campaign have had a detrimental effect on the progress of such programs to educate the masses on family planning.

Illiteracy and lack of Sex Education:

About 40% of the populace is illiterate and has no awareness of the issues caused by unsustainable population growth; hence they keep on breeding children. Due to the general lack of sex education, even the literate lack the basic knowledge regarding sex and contraceptive methods; and further hesitate to consult due to the subject being a social taboo.

Due to extreme poverty, poor people tend to have more children in the hopes of having more earning hands to support the family financially. It is also one of the key reasons why children drop out of schools in Pakistan.

Religious controversies about women’s role in society have spilled over into the family planning debate. The organized religious political parties officially oppose the population programs, and many people under the influence of such persons still believe that family planning is un-Islamic, thus undermining political and moral support for family planning issues.

The cultural attitudes towards women confine them to their homes and treat them as having being created for the sole, noble purpose of breeding only with no life of their own. In Pakistan, only one-fifth of women have access to contraceptives, with most women in the country having no say in the size of their families as their husbands dominate such decisions.

Despite a rather grim picture, a rise in the trend of contraceptive use was observed; from nearly 18% in 1994-1995 to about 24% in 1996-97. It indicated that the efforts on the part of the Government were somewhat bearing fruits by gaining a positive response from Pakistani couples to the adoption of family planning. However, more needs to be done in this regard to tackling the issue of overpopulation to cut down population pressures on the country’s scarce natural and capital resources.

There is a need to have a consistent political will and policy to overcome the constraints to implementing the measures to control the population. The government should set strategies that focus more on the quality of the service, effective communication of the message, and accessibility of family planning centers. They should take religious scholars on board who can educate and convince the masses against the loose mainstream opinions related to the concept of family planning while shedding light on this issue in the context of the Quran and Sunnah.  These campaigns should be consistent and convincing even in the face of backlash from the religious political parties but should not seem too imposing at the same time to convince the people and the opposition through logic.

The Government also needs to do more to empower the women of Pakistan. They should try encouraging parents in the rural areas to send their girls to school and letting them complete their education through offering incentives, all the while discouraging early marriages. These were the measures taken by the Bangladeshi government shortly after their independence to keep the population growth in check. They succeeded in this task by empowering the women of their country. Bangladesh also provided women with free contraceptives for decades, and the government also gave women small loans to start their businesses. By implementing the example of a fellow Muslim country, Pakistan can also achieve some success at controlling the growth rate.

As the concept of introducing sex education in schools is still taboo in a conservative society like Pakistan, the government should instead come up with a law that bounds a couple to attend mandatory sessions on the subject of sex education as a prerequisite to getting married. It would help ensure that the couple to be married is well informed about the methods of contraception and is made aware of the repercussions of overpopulation. The simple economic concept of scarcity should also be taught to them.

Last but not the least, the government should try to improve the standard of education and contents of the curriculum to especially educate men against the cultural beliefs regarding the position of women in society and the widely practiced misogynistic norms that take away their autonomy. Women empowerment can’t materialize unless the men get educated to let their daughters, sisters, and wives get an education, earn financial freedom and decide in matters related to the size of their family. Basic economics should also be added into the curricula so that the students can have an awareness of the consequences of overpopulation from a young age.

The 13 Ideal Cities To get Single Individuals Looking For Love