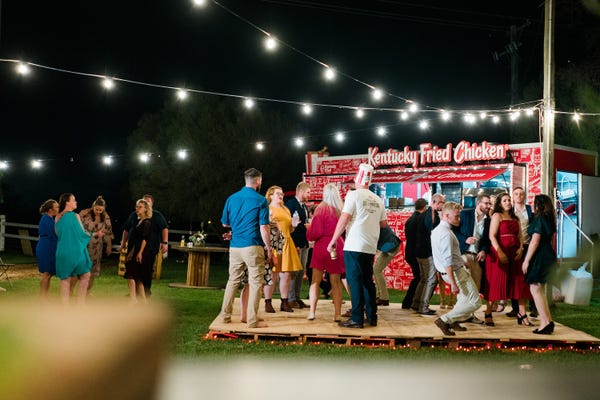 There are chicken lovers but An Australian couple has become the first people in the world to have an official KFC-themed wedding.

Kate and Harrison Cann from Toowoomba, Queensland not only surprised their 150 guests by having all the catering at their nuptials provided by the fast-food chain, but the entire celebration was KFC-themed too, Business Insider reported.

Not only did the couple’s friends and family not know they were arriving at a KFC-themed shindig, but they also didn’t even know it was Harrison and Kate’s wedding.

According to Business Insider, Having had their first date at KFC in 2017, and Harrison proposing to Kate at Australian landmark Uluru two years later, it was something of a coming full circle for the bride and groom.

The newlyweds were the first of six Australian couples to have won a KFC-themed wedding from over 2,000 entries they were selected after creating their own version of “The Fresh Prince of Bel-Air” theme tune about their love for each other and KFC.

‘Inside the Actors Studio’ creator James Lipton dies at 93

Sirbaaz Khan has won our hearts!

A day before Ramadan, utility stores across Pakistan shut down!