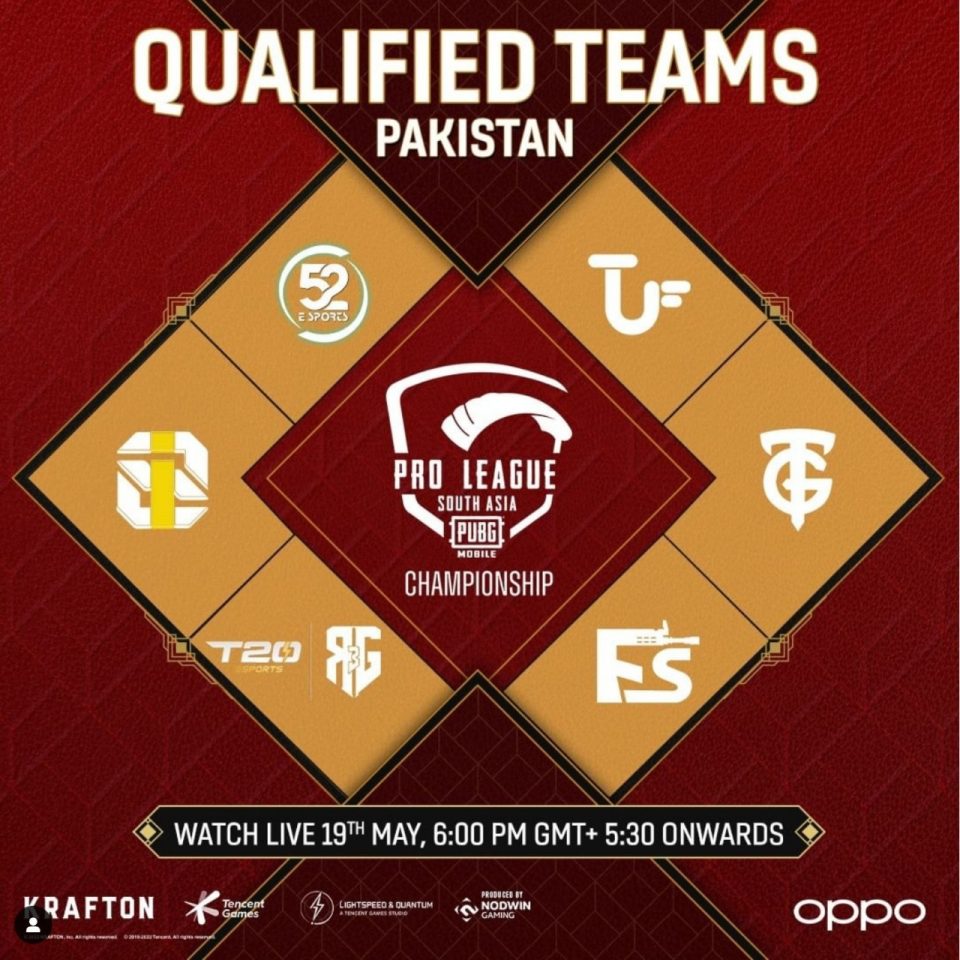 May 18, 2022 – Adding to its list of innovative achievements in Esports around the world, PUBG MOBILE, the country’s leading online battle royale platform completed its first exclusive pro-level gaming tournament in Pakistan. The 52XRAGE ESPORTS team was declared winners of the tournament earning 186 points, including 63 kills in its 18 matches. They went up against the toughest competition in their rival teams and emerged as the ultimate champions after 25 nail-biting days of competition.

The 2022 PUBG MOBILE Pro League Pakistan Spring (PMPL Pakistan) provides teams a competitive professional platform to battle for prizes. The competition stretched a total of 18 days including 3 days for the Finals where the top 16 teams from the league stages competed against each other. The total prize pool for the competition was PKR 17,600,000 – the highest ever for a PUBG MOBILE Tournament in Pakistan. The top six teams from Pakistan, including the national winner, will advance to the South Asia Championship that takes place from the 19th to 22nd May, 2022 to compete in a nail-biting three-day battle against teams from across South Asia. Last year’s winners of the South Asian tournament were Mongolia and Nepal.

In order to enhance excitement and create a more stable competitive environment, the PMPL will now run on a 1-year-cycle instead of seasonal relegation, which means the teams competing in the upcoming 2022 PMPL Pakistan Spring will also be competing in the Fall Split.

Also following the immense success of the tournament, the PMPL is introducing new updates and changes to the broadcast arrangements of the South Asia Championship. The audience experience will be significantly enhanced by reducing gaps between the matches, and creating virtual studios for fans to enjoy the matches. There will be many interesting in-game activities and items prepared especially for the fans and audiences, which you too can explore starting May 19th, 2022. Another new surprise that fans can look forward to is a very special watch party featuring influencers and guest celebrities like Raza Samo, Mathira, and Bhola record to accompany the exciting tournament matches.

Within the virtual spaces, fans will be able to show support to their favourite teams by participating in YouTube polls, and digitally wearing their team badges. There will also be live chat, voting, and multiple choice questions to keep the audience engaged and entertained. Players will also be able to select Urdu as their preferred language, and enjoy a custom storyline that varies based on their country. Fans will be shown additional data related to their favourite players from their own countries.

The immense success of the first ever PUBGM Pro League Pakistan isn’t just proof of Pakistan’s passion for gaming, but also a promise of an inclusive, lively local gaming ecosystem for everyone.

The event was attended by celebrities and influencers to raise the spirits of competitors between thrilling matches, with performances from artists like Neelam Muneer Khan, AimaBaig, and Bilal Saeed. The performances were live streamed during the finals.

For more information, stay tuned on

PUBG MOBILE is based on PUBG: BATTLEGROUNDS, the phenomenon that took the world of interactive entertainment by storm in 2017. Up to 100 players parachute onto a remote island to battle in a winner-takes-all showdown. Players must locate and scavenge their own weapons, vehicles and supplies, and defeat every player in a visually and tactically rich battleground that forces players into a shrinking play zone.

PUBG MOBILE is available to download for free on the App Store and Google Play Store.

Sara Loren opens up about her love story

PM Imran Khan should step down to end crisis?

Don’t let those extra curves hold you back!