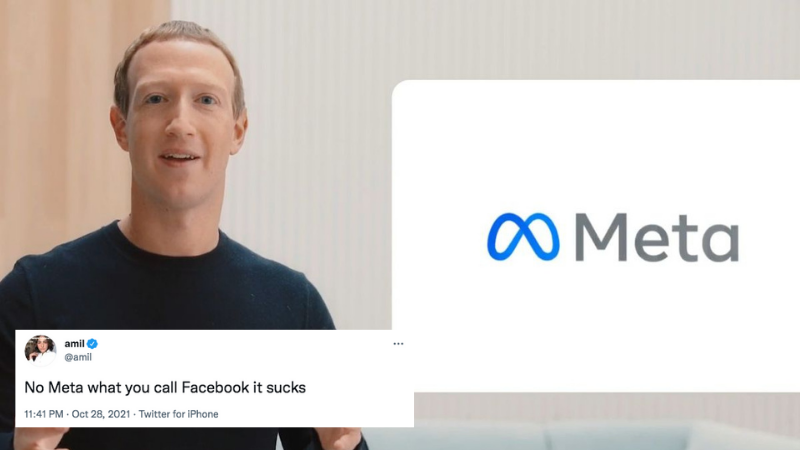 Facebook recently decided to change its name to Meta and the world isn’t taking it. Twitter user’s have only made fun & meme’s out of the name!

As soon as Mark Zuckerberg announced the name, everyone on the internet started making jokes. An online world where we can communicate, play games while simultaneously work using virtual reality sounds unrealistic & fictional!

“Right now, our brand is so tightly linked to one product that it can’t possibly represent everything that we’re doing today, let alone in the future,” said Zuckerberg.

His announcement was turned into meme’s & many jokes were made out of it. Facebook is trying to revamp itself through venturing out a possibility where people can work, play and communicate with the help of a virtual reality headsets! That’s quiet imaginary & one can’t grasp the credibility of what Zuckerberg has announced.

Everyone calls Facebook a scandal, a plague and merely changing the name wont bring any difference. If Zuckerberg thinks we can forget the damages done simply by a change of name then he needs to reevaluate & rethink his decision of calling Facebook, Meta.

There have been so many problems related to hate speech, misinformation & other harmful content. However, Facebook denies all such accusations, noting that it has more than 40,000 people working on safety and security. About 3.58 billion people use Facebook and its services every month.

“A name change doesn’t suddenly erase the systemic issues plaguing the company,” Forrester vice president and research director Mike Proulx said in a statement. “If Meta doesn’t address its issues beyond a defensive and superficial attitude, those same issues will occupy the metaverse.”

At the end, does it really matter what Facebook calls itself? What are your thoughts about it?

How to stop the virus making us all fatter

Big Ben to ring at the exact moment of Brexit, but why ?

“Not playing in the Word Cup 2011 Semi Final is one of the biggest regrets of my life,” Shoaib Akhtar!