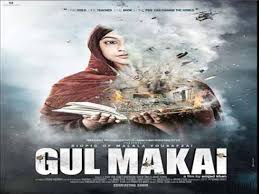 Gul Makai is an Indian tribute to the Pakistani activist Malala Yousafzai, the youngest Nobel Peace Prize laureate. It describes the beauty of her land, Swat Valley, along with an elegant artifice telling a story of startling fundamentalism. It opens up a conversation on female education rights in the region and the resilience of the residents there. The valley is an epitome of resistance to hardliners and it brims with innocence despite the adversities.

Director Amjad Khan tells Malala’s story with an elaborate dateline of the decade’s happenings on the Pakistani border – the army and militants conflicting to gain control over the snow-capped valley while the residents are left in limbo. With a grim, grey tone setting, the snow and white light turning dark during dramatic attacks, Khan crafts the movie more as a history of what occurred in Swat Valley and less of Malala’s story.

Malala (played by Reem Shaikh) is inspired by her education reformist father Ziauddin Yousafzai (Atul Kulkarni). She is heartbroken by the assassination of the then Prime Minister Benazir Bhutto, who she considers a role model. In a brief moment, she gets confused by her teacher’s statement supporting Bhutto’s killing. The father then briefs her that one needs to build their own outlook, along with keeping a safe distance from those with different viewpoints.

Once Swat Valley is conquered by the Taliban, her mother insists on moving away until things calm down. The complete ban on education for females angers school-goers and kids are seen more determined than ever to achieve their dreams.

A parallel storyline in the movie is that of a daring broadcast journalist Musa Khan Khel, who reports both sides of the conflict. In contrast to the innocence portrayed by Malala and Khel are the militants who are shown dancing with their guns. Their harsh imagery contrasts with the way the movie is structured – around music and dance.

While he is trying to attain a liberal perspective, Khan’s film represents the deep-rooted beliefs of Malala and her family and how it helps them progress. The minimal use of graphical violence in the film is compensated by gunshot sounds, used repetitively in the film till the very end. The film also showcases how Malala is affected by the constant voice of cannons in her neighbourhood.

When she gets the opportunity to pen down her thoughts under the pseudonym Gul Makai – from where the film gets its name – for BBC Urdu, her writing is seen only as an artistic glimpse. Not much focus is given on what she had written to provoke the Taliban, although it’s obvious it was against them. They track her down and shoot her while she’s returning from school after exams.

One point of Khan’s directorial brilliance is when images of Malala walking through the school’s corridors are juxtaposed with images and voices of the army men who had camped at the school during the militant crackdown. While the cinematography and VFX are average, the use of soundscape is exceptional.

You may be disappointed if you go to watch the film to learn more about Malala. But do watch it for its directorial excellence, a very different genre of music (also penned by the director), not to mention the Swat dialect. The movie ends with Malala being taken to hospital. That is actually the moment from which the world begins to know the young education activist. The director leaves the rest of the story for the audience to explore themselves, as her life after that, has been extensively covered in media.

ALL YOU NEED TO KNOW ABOUT T20 PAKISTAN MATCHES

How to stop the virus making us all fatter

Hailey Bieber gets brutally honest about social media: ”It hurts to be torn apart”

Fasting hours around the world in 2019!