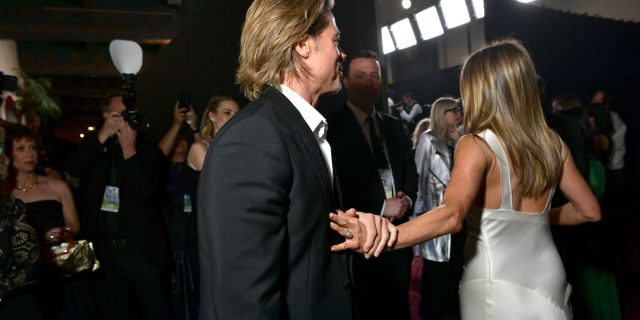 Jennifer Aniston and Brad Pitt have left fans in a happy situation about their reunioun since their touchy-feely interaction at the SAG Awards in January.

The first cousin of “The Morning Show” actress, during an interview to a media outlet, has reportedly revealed that Aniston and Pitt are rekindling their romance.

“Hey, I would love it!” he revealed to Fox News. “I think they are a good match.”

Aniston’s cousin, who currently lives in Greece, continues to follow Friends star’s work and accomplishments from halfway around the world.

When viewing the now-viral photos of the “Once Upon A Time In Hollywood” actor clutching Aniston’s wrist on the SAG Awards red carpet, he couldn’t deny the exes’ chemistry.

The duo originally met in 1998 while Aniston was starring as Rachel on what would become the iconic sitcom “Friends.”. They later tied the knot in a Malibu, Calif, wedding in July 2000.

“It was a party! I liked Brad and I liked his family,” the cousin shared, adding that the Pitts are “extremely elegant people.”

After 5 years of marriage the pair divorced in 2005 and, five months later, images surfaced of Pitt and his “Mr. and Mrs. Smith” co-star Angelina Jolie. Pitt tied the knot with Tomb rider star in 2014 but the two split in 2016.

Pitt and Aniston admitted in recent years that they’re still good friends. The 56-year-old actor even attended her 50th birthday celebration as well as her star-studded holiday party in 2019.

Ariana Grande’s engagement ring is worth a million bucks

Urwa Hocane opens up about her struggle with depression