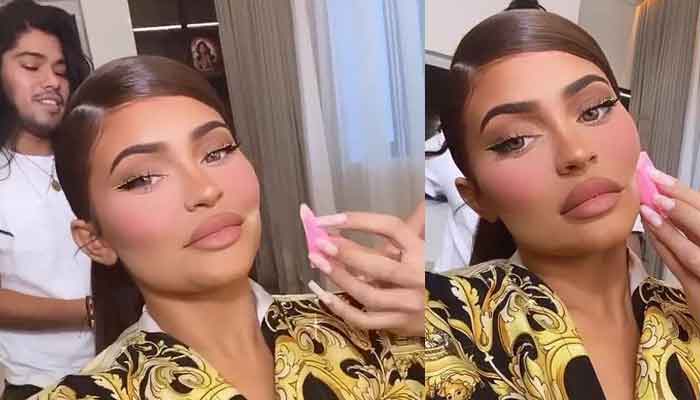 The beauty mogul put her elegance up on display as she filmed her glam session while getting ready for a night out.

The reality star, who spends a lot of time in the hair and makeup chair to give herself a stunning look, was surrounded by her longtime glam squad on Saturday.

The 23-year-old beauty filmed her glam session and shared it on Instagram to mesmerise her fans.

Kylie, in the post, is seen among her makeup artist Ariel Tejada and hairstylist Jesus Guerrero.

Clad in a Versace robe with her hair slicked back into a stylish ponytail, Kylie jokingly called the duo ‘so unprofessional’ as the they bantered over eyeliner.

It happened when Jesus and Ariel began to discuss Kylie’s eyeliner, she blurted out ‘Can you guys stop fighting’ before giving a smirk.

As the boys continued to do her up, the ‘Keeping Up With The Kardashians’ beauty faced the camera and told her 196M followers, ‘My glam team is so unprofessional, don’t hire them’ she said with a smile on her face as her team blurted out laughing.

Colombian Ladies Intended for Marriage And also other Merchandise

How to socialize as an Introvert

Half a million people want to get into Area 51 and it is crazy!