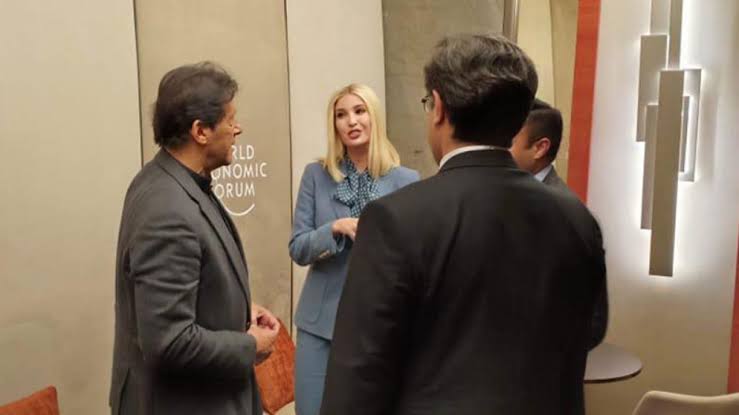 Prime Minister Imran Khan and Ivanka Trump had in informal meeting on the sidelines of the World Economic Forum (WEF) 2020 summit on Wednesday.

Pictures from the meeting between the two surfaced on social media in which PM Imran and Ivanka can be seen exchanging pleasantries.

Adviser to the Prime Minister on Overseas Pakistanis Zulfi Bokhari can also be seen in the photo with PM Imran.

This is the first time that the Pakistani prime minister met President Trump’s daughter. The senior White House adviser has previously expressed her desire to work towards empowering Pakistani women to help them become a part of the country’s workforce.

In a meeting with the PM’s special assistant on Overseas Pakistanis in Washington DC last year, Ivanka had shown keen interest in launching various programmes for the welfare of women in Pakistan.

Bukhari had thanked Ivanka for her interest and also extended an invitation to the US president’s daughter to visit Pakistan.

Last year in July, when he met Trump at the White House, PM Imran interacted with the First Lady Melania Trump as well.

The prime minister is in Davos to attend the WEF summit. Earlier, he spoke at the conference and said his government’s biggest challenge was to improve state institutions so that it brings about enhanced governance at every level.

“We are heading in the right direction, though I have to say, we have to do a lot of hard work,” he said in his speech. “This year now, the focus is on increasing investment and providing employment to more people.”

The prime minister had said that one of the biggest advantages that Pakistan had was its population. “We are a nation of 210 million people and more than 60 percent of our population is below the age of 30,” he said.

Before concluding his speech, PM Imran stated that Pakistan had been gifted with a young population and a strategic location. He said his government’s “biggest challenge” now was to improve state institutions which would, in turn, refine governance.

Heavy showers are still expected in Karachi for two days

IBM has fired over thousands of old employees in last 5 years.