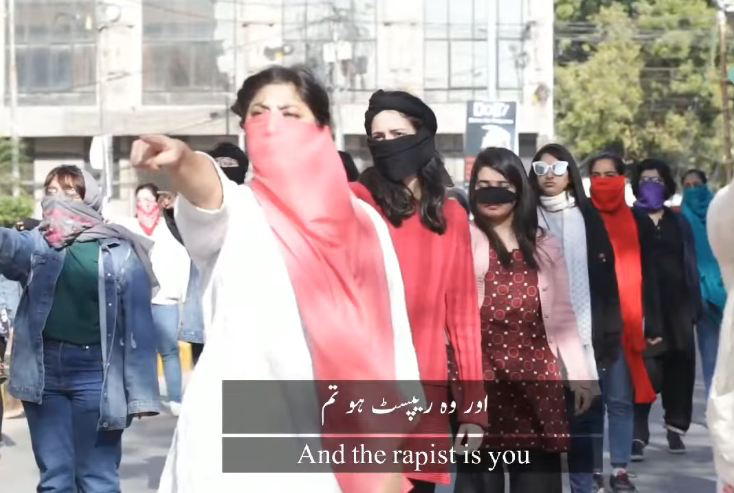 The Aurat March has released an Urdu version of Chilean protest song “A Rapist in Your Path”, which is about rape culture and victim-shaming.

A Rapist in Your Path is based on the work of Argentinian theorist Rita Segato, who argues that sexual violence is a political problem, not a moral one. It has been performed in Latin America, the United States and Europe.

The song condemns the judicial system’s failure to protect women and their rights and raises awareness about the culture of violence in society, according to a statement by the Aurat March. It says this culture is prospering, with acts of violence being normalised and women being humiliated and often blamed after reporting such acts.

While talking about the song, Qurat Mirza, one of the organizers of Aurat March, told that the video is a contribution to the global women anthem trend which started after the Chilean protests.

“In the song, women and all sexual minorities reject all sorts of violence against them and they are announcing the start of a movement of resistance against such violence,” she said.

The lyrics of the song, which was uploaded on Thursday, describe how institutions–the police, the judiciary and political power structures–uphold systematic violations of women’s rights. “The rapist is you/ It’s the cops/ The judges/ The state/ The president/ The law/ The feudal/ The clerics.”

The Aurat March has made some additions to the original lyrics, such as the inclusion of the feudals and clerics in the song.

Join us as we perform this anthem against rape on March 8 2020.

We are not victims. We are not helpless. United, our power is enough.https://t.co/S8tdXHp7s5

Another part of the song talks about the many ways women are blamed for falling victim to sexual violence. “And it’s not my fault / nor where I was / nor what I wore”. “The rapist is you.”

Mirza explained that the biggest reason behind this video is to inform women that violence or rape does not happen because of one’s clothes, choice, place, sect, caste, religion or race. “It is a power relationship, in which a rapist exercises his power over the vulnerable or the weaker,” she said. This song says we will also fight and resist against the violence, added Mirza.

The song has been the subject of debate on social media, both from people supporting it and those opposing it. “We are also getting responses from people who are being questioned and accused in the video,” said Mirza. “The reaction is the same as we expected from a misogynistic segment and we are prepared for it.” She added that a zalim (cruel person) should be called zalim and be identified.

With its powerful message, the song calls on people to perform this anthem against rape during the Aurat March on March 8.

It all started in 2019 on the International Day for the Elimination of Violence against Women outside the Supreme Court in Santiago del Chile. A group of women came together for a feminist flash mob, adding their meaningful, powerful voices to the protests against inequality that have filled the streets of the capital for weeks.

´Lord of the Rings´ show to start filming in New Zealand