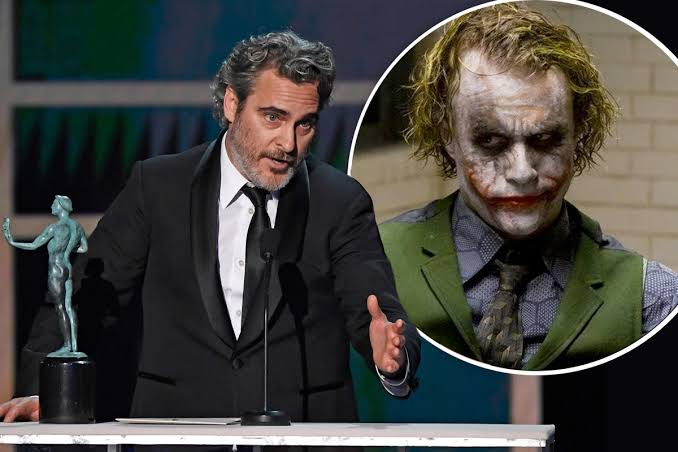 Phoenix won the Outstanding Performance by a Male Actor in a Leading Role award for his part in Joker on Sunday in Los Angeles.

He took a moment to thank his ‘favorite actor’ Heath Ledger, who played the comic book villain in the 2008 movie The Dark Knight.

“I’m standing here on the shoulders of my favorite actor, Heath Ledger,” he said.

Ledger passed away in 2008 at age 28, the same year his film The Dark Knight was released.

The 45-year-old actor also extended his gratitude to the cast and crew during his speech.

He also praised his fellow nominees and admitted he feels honoured to be a part of the acting community.

"I'm standing here on the shoulders of my favorite actor Heath Ledger." Joaquin Phoenix thanks the late #DarkKnight star while accepting the #SAGAwards statue for #Joker https://t.co/tD2ozkArqi pic.twitter.com/k9q8hwFFrM

Speaking about Leonardo Di Caprio, Joaquin Phoenix said recounting his early days, “Going to auditions, I’d get the final callback, and there would always be two other guys I was against, and we’d always lose to this one kid.”

“No actor would ever say his name cause it was too much but every casting director would whisper ‘It’s Leonardo.’”

He said of the Once Upon a Time in Hollywood star: “Leo, you’ve been an inspiration to me and so many other people for 25 years. Thank you very, very much.”

Joaquin Phoenix won a Golden Globe and a Critics’ Choice Award for the role, most recently nabbing an Oscar nomination.

Export: Vegetables and Fruits on the Rise Despite COVID19!