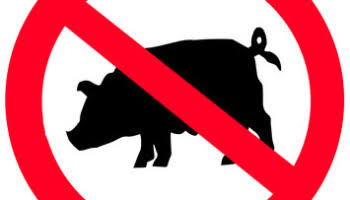 Qur’an has everything for humans; law, moral, guidance and many more things. It declared certain things as ‘Haram’ which is forbidden and unlawful for Muslims. Pig and its meat ‘pork’ is one such haram thing. Muslims don’t eat pork and consider pigs as filth and avoid it.

“Forbidden to you (for food) are: dead meat, blood, the flesh of swine, and that on which hath been invoked the name of other than Allah.” [Al-Qur’an 5:3]

“And the swine, though he divide the hoof, and be cloven footed, yet he cheweth not the cud; he is unclean to you”.

“Of their flesh shall ye not eat, and their carcass shall ye not touch, they are unclean to you.” [Leviticus 11:7-8]

Now, Science has also backed this law of Islam with proof that how eating pork is dangerous and harmful for humans. A large number of human populations consume pork and it is quite harmful for them but they eat it in ignorance.

Islam is from Allah and Allah knows what is beneficial for mankind and what is harmful for them. Science has also found that pig is harmful and dangerous for humans and is correctly labeled as ‘Haram’.

Here are 10 reasons that support the subject of discussion:

Prohibition of eating pork does not imply that pigs are evil. There is nothing in Islam that actually declares the animal to be evil, or anything of the sort. Not eating pork is a very simple means of showing our devotion to our Lord.

China’s Emergence in Gene Research, First Ever Cat Cloned In! Find Out Here.