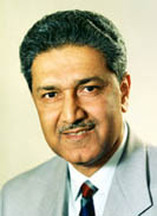 Abdul Qadeer Khan, also known as A.Q. Khan, (* 1. Missiles and know-how were sold or traded to Iran, North Korea, Libya, and possibly other countries.
Khan accepted a job as an inspector of weight and measures in Karachi after graduation. He later resigned and went to work in Netherlands in the 1970’s. Khan gained fame as a talented scientist at the nuclear plant he worked in. He had special access to the most restricted areas of the URENCO facility. He could also read the secret documentation on the gas centrifuge technology. Khan was greatly influenced by events in his homeland, notably Pakistan’s humiliating defeat in a brief war with India in 1971, the subsequent loss of East Pakistan to the creation of a new independent country, Bangladesh, and the test of nuclear explosives from India in May 1974. Khan wrote to Pakistani Prime Minister Zulfikar Ali Bhutto on September 17, 1974, offering his help in preparing an atomic bomb. In the letter, he argued that the uranium path to the enrichment centrifuge pump was better than the plutonium path (already underway in Pakistan), which relied on nuclear reactors and reprocessing.
Bhutto met with Khan in December 1974 and encouraged him to do whatever he could to help Pakistan reach the bomb. During the following year, Khan stole centrifuge drawings and compiled a list of primarily European suppliers from which parts could be purchased. On December 15, 1975, he left the Netherlands for Pakistan, accompanied by his wife and two daughters, with his copies of plans and the list of suppliers.

According to media reports, A.Q. Khan had a close and warm relationship with President General Mohammad ZiaulHaq and the Pakistani army. He also had a close relationship with the Pakistani Air Force.
Following his role in the Pakistani nuclear program, Khan reorganized the Pakistani space agency SUPARCO. In the late 1990s, Khan played an important role in the Pakistani space program, particularly in the first Pakistani project Polar Satellite Launch Vehicle (PSLV) and Satellite Launch Vehicle (SLV). Khan’s unrestricted disclosure of Pakistan’s nuclear weapons and ballistic missile capabilities brought humiliation to the Pakistani government. The United States began to think that Pakistan was giving North Korea nuclear weapons technology in exchange for ballistic missile technology. Khan was back under the microscope after the September 11, 2001 attacks in the United States. He allegedly sold nuclear technology to Iran. However, he was pardoned in 2004 but placed under house arrest.
On August 22, 2006, the government of Pakistan announced that Khan had been diagnosed with prostate cancer and was undergoing treatment. In February 2009, he was released under house arrest.

She is More Than Just A Pretty Face

Will season 12 bring back the glorious days of Coke Studio?