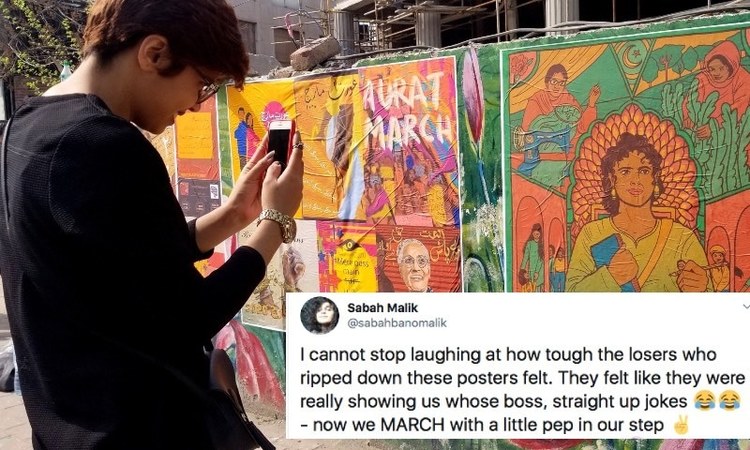 In the past two years, women have been subjected to online and offline abuse and severe backlash for simply marching for their rights in a peaceful protest all over the country.

While this usually kicks into high-gear after the Aurat March, this year, male egos were bruised way before the actual event.

Aurat March volunteers, after getting due permission, put up a mural in Hussain Chowk, Lahore to voice the concerns of women underrepresented and silenced in society.

Today we were buoyed by the love and behanchara on display today, only for it to be torn down hours later.

For those who say why we march–this is why!!

First picture: Earlier today as we built our mural.

Subsequent pictures: Later today, after our mural was torn down. pic.twitter.com/XfGqAEFaCI

Ironically, the artwork was torn apart by a mob within hours, who was clearly uncomfortable with the idea of women taking enough space on walls that were already surrounded by political agendas or advertisements about ‘mardana kamzori ke ilaaj.’

I am shaking with anger at the moment. Some volunteers from @AuratMarch put up some beautiful posters for the March up today on a wall at Hussein Chowk and in LESS THAN A DAY they’ve been ripped apart and destroyed because our society can’t handle any ounce of feminism. pic.twitter.com/WBbOYZBOSx

As the March approaches, women and allies attempt to reclaim public spaces and create awareness regarding patriarchy that affects both genders and our society on a whole.

They say third time’s a charm but people seem to get even more frustrated with the idea of mutual respect.

Today we were buoyed by the love and behanchara on display today, only for it to be torn down hours later.

For those who say why we march–this is why!!

First picture: Earlier today as we built our mural.

Subsequent pictures: Later today, after our mural was torn down. pic.twitter.com/XfGqAEFaCI

I cannot stop laughing at how tough the losers who ripped down these posters felt. They felt like they were really showing us whose boss, straight up jokes ???????? – now we MARCH with a little pep in our step ✌️#auratmarch #auratazadimarch #metoo https://t.co/HuJxpf2kWJ

Good to know the patriarchy is afraid of a mere poster.

You can tear down the posters. But you cant tear down our morals.
We are high spirited and we will flood with more posters.Does these hurt your fragile ego?Awww Tearing down our posters at hussain chowk lahore is hate and means you are scared of rising women #AuratAzadiMarch2020 pic.twitter.com/NoFriVaRbQ

Salman Sufi calls out the act of violence as stemming from male insecurity, and where is the lie?

Tearing up posters of a peaceful organization only shows insecurities deeply embedded within certain elements of society. Each poster that gets torn gives encouragement to hundreds of women to stand up for their long due rights. #AuratAzadiMarch2020 @AuratMarchKHI

”If you hate in extreme the artwork put up by a woman, imagine the extent to which you could hate the woman herself?”

In an attempt to resist the forced silence, artist Shehzil Malik encourages people to download her poster and speak to friends, family and neighbours about what it means.

Let’s paste more!! ???????? I’ll put my poster online free to download like last year. Feel free to print and paste in your neighborhood. Talk to ppl about what it means– a Pakistan for women also. https://t.co/wezpU8hdUm

We will continue to march, say our allies. That’s the spirit.

we will still join the #AuratAzadiMarch2020 on 8th march if they even prisoned or torture us https://t.co/ysoRvIYDSj

What good has anyone ever gotten out of violence, we ask?