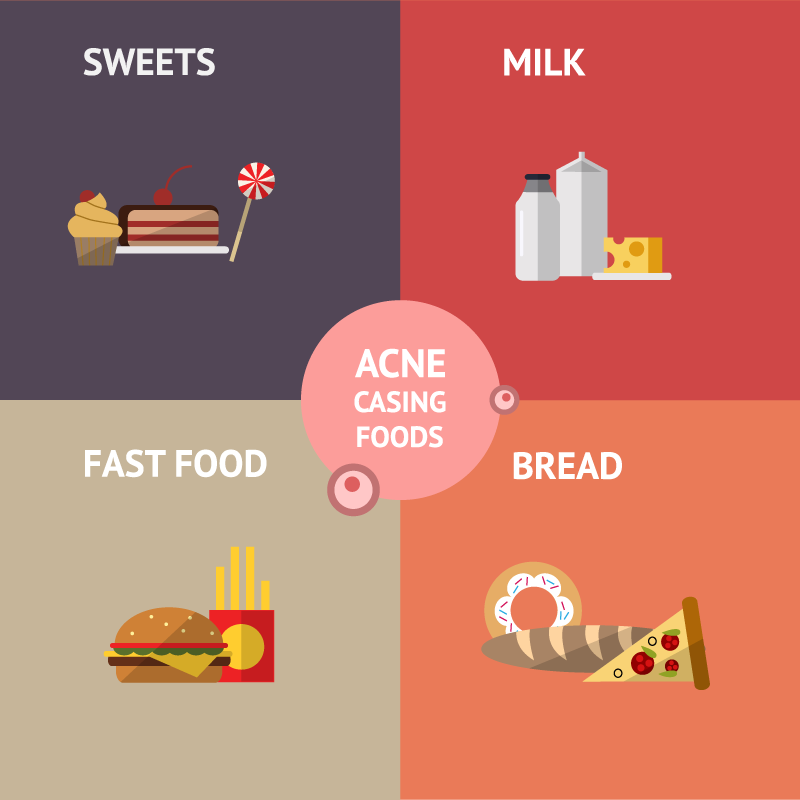 Acne is a prevalent skin disorder that affects about 10% of the global population. Sebum and keratin production, acne-causing bacteria, hormones, clogged pores, and inflammation are all elements that contribute to the development of acne. Although the relationship between nutrition and acne has long been debated, new evidence indicates that diet might play a substantial influence in acne development.

Milk products have been linked to the severity of acne in teens in several studies. Two studies also discovered that young adults who consumed milk on a daily basis were four times more likely to develop acne. However, the studies that have been done thus far have been of poor quality. To yet, research has primarily focused on teens and young adults, and has only shown a link between milk and acne.

Acne is closely linked to a Western-style diet that is high in calories, fat, and processed carbs. Burgers, nuggets, hot dogs, French fries, drinks, and milkshakes are staples of the normal Western diet and may contribute to acne. It’s worth noting, though, that the majority of the study on fast food and acne has relied on self-reported data.

According to one study, those who regularly consume added sugars had a 30% higher chance of acquiring acne, while those who regularly consume pastries and cakes have a 20% higher risk. The impact of refined carbohydrates on blood sugar and insulin levels may explain this higher risk. Refined carbs are easily absorbed into the circulation, causing blood sugar levels to rise quickly. Insulin levels rise when blood sugar levels rise, helping to transport blood sugars out of the circulation and into your cells. High insulin levels, on the other hand, are not beneficial for acne sufferers.

It’s unknown why chocolate causes acne, however one study revealed that consuming chocolate enhanced immune system responsiveness to acne-causing bacteria, which might explain these findings. While new study suggests a relationship between chocolate and acne, it’s still unclear if chocolate is the cause of acne.

24 years to Australian cricket in Pakistan

Powerbeats Pro Vs. Galaxy Buds choice is yours

Why you really need to add a primer to your make-up routine!

The psychological impact of quarantine and how to reduce it