Pakistani actress and model Amna Ilyas also expressed how unhappy she is over Prime Minister Imran Khan’s views on vulgarity being the cause of increasing rape cases in the country.

Imran Khan linked “fahashi,” or vulgarity, with the concerning rise in cases of sexual violence, including rape.

All these comments came during a session where he was taking calls from the public when a citizen asked what the PTI government planned to do regarding the rising incidents of sexual violence, especially against children.

What actors have to say, take a look: 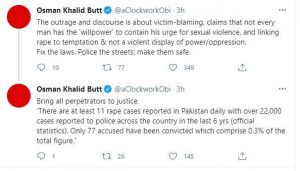 WhatsApp will soon be available on multiple devices without internet connection

The 7 questions Dermatologists get asked all the time – And Their Answers.