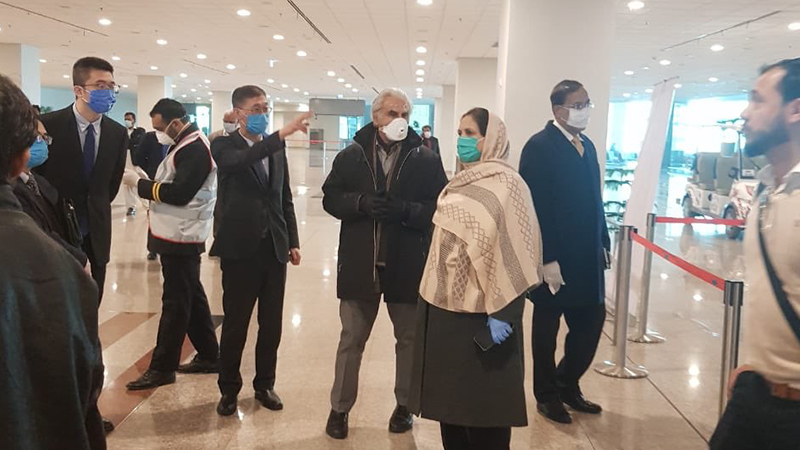 Pakistan’s Civil Aviation Authority has restored flight operations to and from China after a five-day suspension due to the outbreak of coronavirus in China.

The China Southern Airline’s flight CZ6007 reached Islamabad at 9am today (Monday). It was the first Chinese airliner that landed in the country in the last five days.

The passengers, 57 Pakistanis and 12 Chinese nationals, were received by Special Assistant to the Prime Minister on Health Dr Zafar Mirza and China’s Ambassador to Pakistan Yao Jing.

201/ At Islamabad airport this morning – received passengers from China along with HE Chinese Ambassador in ???????? CZ6007 brought 69 passengers including 57 Pakistanis and 12 Chinese. We supervised implementation of “Airport SOPs” & I interviewed passengers. pic.twitter.com/22GleZfmUa

On January 29, Pakistan had temporarily suspended all direct flight operations between China and Pakistan till February 2.

Over 17,000 cases have been confirmed in China and 361 deaths. The virus emerged in its Wuhan city.

Many countries have barred foreigners arriving from China and are quarantining their own citizens.

On Sunday, Dr Mirza announced that Pakistan has received coronavirus testing kits from China and Japan.

These kits are needed to confirm cases of coronavirus. Without them, samples have to be sent to China or other countries for confirmation.

Pakistan has not evacuated its citizens from Wuhan, the epicenter of the virus, and says it was screening passengers arriving from China.

So far, no cases have been confirmed in Pakistan. However, four Pakistani students have been diagnosed with the virus in Wuhan.

7 Pakistani actors who could believably appear in Money Heist